Poem For A Thursday: Frost 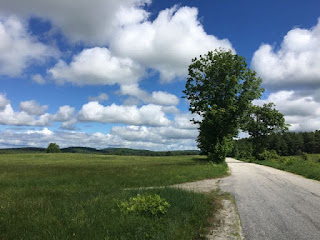 Why make so much of fragmentary blue
In here and there a bird, or butterfly,
Or flower, or wearing-stone, or open eye,
When heaven presents in sheets the solid hue?

Since earth is earth, perhaps, not heaven (as yet)--
Though some savants make earth include the sky;
And blue so far above us comes so high,
It only gives our wish for blue a whet.

We're off to New Hampshire later today to visit family, so I thought I'd better do Robert Frost, right? The photo above is from near Unity, NH, two years ago, and we'll be there again.

I was going to pick Fire and Ice, a poem by Frost I've known forever, but it didn't really fit the picture, and this was the poem immediately above it in my collected Frost. Both come from his collection of 1923 titled New Hampshire.

Hmm...'our wish for blue.' Well, heaven is not presenting it in sheets in the photo above, and even there it's fragmentary. But we seek it out anyway.

Jennifer has a lovely Mary Oliver poem this week, with a similarly New-England-looking photo. Actually as I think about it, mine doesn't look especially New-England-y, but it is.