Why? Well, because Brona's hosting a readalong, of course! 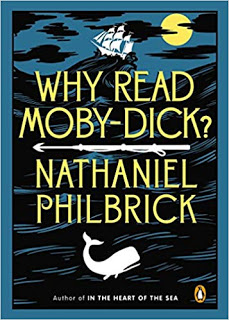 Actually, I found out about this 2011 book from Brona who read it at the very beginning of the readalong. So I didn't need his answer to the question: I was already committed. But our library had copies and, while Brona's review of the book was not unmixed, I thought I'd take a look. It's definitely worth reading, though not least because it's short. 😉

It's not a full biography, but it does contain useful information about the relationship between Hawthorne and Melville at the time of the writing. He did make me want to read Melville's letters to Hawthorne. I did not know, but there was an earlier draft of Moby-Dick in which there was no Captain Ahab! Melville started on his new larger plan for Moby-Dick only after meeting Hawthorne in 1850.

And Hawthorne started writing The House of Seven Gables when he met Melville. Should I reread that? It would be also be a good #RIPXIV book, but that way madness lies, I fear...

Philbrick is quite interested in tying Moby-Dick to the issue of slavery, though, and I have some doubts about that. Now it is a big question in the nation already in 1850. And I agree that race issues do interest Melville: the opening comic misunderstanding which becomes friendship between Ishmael and Queequeg; or the story of Pip, the cook's boy. And while I have no doubt that whale ships were typically a motley collection of sailors from wherever, the Pequod seems to be particularly international, and that's no doubt deliberate, to represent the world in miniature. So race, yes, but I'm less certain about slavery in particular as a theme. But now I will pay attention to the idea.

And Fedallah as Iago, and Pip as Lear's Fool? Maybe so!

Philbrick has also got some interesting things in his bibliography, though that's another direction in which an Ahab-ian obsessive madness lies...but I did order Delbanco's biography of Melville from the library, so we'll see. I also noticed Philbrick has Charles Olson's Call Me Ishmael: A Study of Melville in his bibliography, which I've been thinking about rereading, but probably not until I finish the novel. I remember the Olson pretty well, though it's been thirty years since I read it (and I hadn't read Moby-Dick at the time.) I thought the Olson didn't seem to have much impact on Philbrick, but then near the very end he writes, (about Moby-Dick's afterlife) "What Moby-Dick needed, it turned out, was space."

Well, after the prologue, Olson begins his study,


"I take SPACE to be the central fact to man born in America,..."

I noticed Biblioklept highlighted an earlier post about Olson for Melville's birthday at the start of the readalong, which I enjoyed. So, you know, if you can't wait for my profound thoughts...

Anyway, on with the Pequod!