The Custom of the Country (#CCSpin) 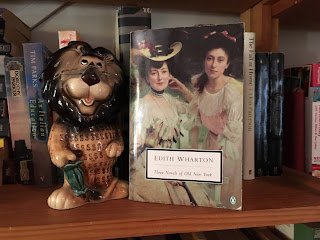 My Classics Club spin selection was Edith Wharton's The Custom of the Country, and once again the spin machine did right by me.

The Custom of the Country is the story of Undine Spragg and her quest for a suitable marriage. The Spraggs are from Apex City (wherever exactly that might be, but it's in the western United States; the Dakotas are mentioned) and Mr. Spragg has had some financial success in his hometown. His daughter convinces him to move to New York so she can mingle with old wealth. He agrees, to please her, but also to put distance between Undine and her attachment to the unsuitable Elmer Moffatt. Young Moffatt may be a man on the make, but he's of unknown provenance, and working, if at all, as a groom.

And that's about all I feel like I should say without spoiler warnings. There are novels you know will end tragically: the fate of Tess is never in much doubt; there are novels you know will end in marriage: after reading, "It is a truth universally acknowledged, that a single man in possession of a good fortune, must be in want of a wife," it can only be the case Elizabeth Bennet will get married, even if you know nothing of Jane Austen. And in those sort of novels it's OK if you know what's going to happen.

But The Custom of the Country is not a novel like that. So:

The novel seems at first like it might be simply a satirical romp. Undine's two best girlfriends, but also rivals in her quest to marry a rich man, are (in their maiden nomenclature) Indiana Frusk and Mabel Blitch. Yowza. Undine is named, her father says, for a hair-curler, one of his first commercial successes.

But Undine (or Ondine) is also the name of a mythological water sprite. The description in the Wikipedia article is so comically apt (or is it?) to our Undine, I have to quote:


"Although resembling humans in form, they lack a human soul, so to achieve mortality, they must acquire one by marrying a human."

When she arrives in New York her guide to society is the rather questionable Mrs. Heeny, a masseuse. Undine and her mother know nothing about old money New York, but under Mrs. Heeny's dubious tutelage, they learn, and Undine learns quicker. Undine captivates Ralph Marvell, the heir to an old money fortune much diminished over the years. Certainly Ralph is more aware of the poetic overtones of the name Undine, though the exact nature of the legend is never mentioned in the novel. Even more than her Romantic name, though, her beauty snares him; that, and the belief she's unformed, and he can do the forming.

Well, we've seen the way she manipulates her father, so we know how that will go.

We're told of the 'Marvell tradition':


The only essential was that he should live 'like a gentleman' -- that is, with a tranquil disdain for mere money-getting, a passive openness to the finer sensations, one or two fixed principles as to the quality of wine, and an archaic probity that had not yet learned to distinguish between private and 'business' honour.

This is all pretty much satire to this point, but Ralph Marvell becomes a pretty sympathetic character; he may be a little romantically naive, but does he deserve Undine?

At one point (Chapter 15) Charles Bowen, a minor character in the old money set, tells Ralph's sister, that men become obsessively interested in their jobs, ignoring their wives, and that women become grasping and consumerist, is 'the custom of the country.' Ralph's sister asks him:


"And is Undine one of the exceptions?"

Her companion took the shot with a smile. "No -- she's a monstrously perfect result of the system: the completest proof of its triumph. It's Ralph who's the victim and the exception."

And so it proves.

But that's not the end of the novel either. Undine spends Ralph--and her father, too--into something like bankruptcy, and abandons her child with Ralph. She plots a marriage with Ralph's richer cousin-in-law, Peter van Degen, a noted playboy, and gets a divorce.

But Peter van Degen won't marry her, and Undine is without a husband and without an income. Undine now sees the usefulness of her child, and agrees to leave the child with Ralph if he can come up with the money she needs. This is Undine at her most villainous; it's what makes her one of the most hated protagonists in literature.

Ralph can't find the money; Undine takes back their child, and Ralph commits suicide; this clears the way for Undine's marriage to Count de Chelles, French and Catholic enough to hesitate in marrying a divorced woman, but not a widowed one. But this marriage isn't a success either. Count de Chelles, unlike Ralph, is perfectly capable of ignoring Undine's tantrums, and eventually falls out of love over her inability to maintain a tone suitable for his Faubourg Saint-Germain set. (Swann's Way came out the same year as The Custom of the Country. Undine Spragg meet Duchesse de Guermantes!)

It's another low for Undine; she brought them both on herself, of course: but this one feels a little less earned than her previous low (after she was abandoned by van Degen.) Raymond de Chelles really does simply ignore her most of the time, and his sense of who her friends should be is quite controlling. Maybe this is a novel like The Red and The Black: a grasping provincial claws her way to the top, only to suffer a fatal comeuppance. But no, this isn't that novel either, and Undine Spragg is not Julien Sorel.

She divorces a second time, which will leave the Catholic Raymond de Chelles in the lurch. With no legitimate son to inherit, his spendthrift, but fecund younger brother will inherit the title and the Hôtel de Chelles. We've seen Elmer Moffatt along the way, succeeding, though with some questionable methods, but it's now he comes back into the picture in a big way, and...

...well, she marries him. But that's not the spoiler; you may not be surprised at that. The Other Reader is currently reading the novel and has already guessed that.

The surprise is she was married to Elmer Moffatt back in Apex City; that unsuitable attachment wasn't just an engagement, but resulted in the first of her three divorces. So two ambitious, not overly ethical, young people from the provinces finally discover in each other what they've always wanted. They could have been married the whole time, with none of the casualties along the way. But Elmer has now got the money to keep even Undine in jewels, and Undine has acquired a tone that, while it may not be sophisticated enough for the de Chelles family, will do just fine for an Elmer Moffatt. A happy ending? A dark comedy of sorts? And if one likes categories, that will probably have to do.

But there's one more twist. One of the Apex City set is appointed the U.S. ambassador in London, and Undine thinks that's what I really want to be, an ambassadress. But she can't, because she's been divorced. The novels ends with:


But under all the dazzle a tiny black cloud remained. She had learned that there was something she could never get, something that neither beauty nor millions could ever buy for her. She could never be an Ambassador's wife; and as she advanced to welcome her first guests she said to herself that it was the one part she was really made for.

Ha! So the scheming provincial gets her comeuppance anyway. But in a tiny way. And why was she divorced? Because her father compelled her to get divorced; back then Elmer Moffatt seemed unsuitable, though we've come to see they're all too suitable to each other. To what extent is Undine even the author of her own fate? If she'd stayed married to Elmer, as she wanted, she could have been an ambassador's wife! That is, if Elmer had still succeeded, dragging along the spendthrift Undine. And Undine had acquired the tone to be an ambassador's wife as the wife of Elmer Moffatt.

And even then would she have been happy? Or are Undine's (and all human) wants simply unlimited, as economists say? Well, you'll just have to decide.

If you got this far...ignoring all my spoiler warnings...it may be you've read it. What did you think? Did Undine get what she deserved? What did she deserve?

The Classics Club
Posted by reese at 4:22 PM