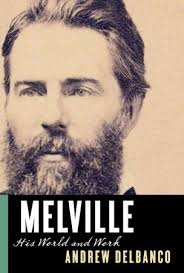 Andrew Delbanco is definitely in the spirit of the thing: he begins his biography of Herman Melville with "EXTRACTS (supplied by a Sub-Sub-Sub-Librarian)." The quote from Samuel Beckett above is one of the extracts, but there's also Conrad, Updike, Roth, Ken Kesey, and Ray Bradbury all commenting on Melville or his works. There's also a transcript of a Sopranos episode.  (A.J. Soprano is reading Billy Budd in high school.)

I thought it was a very good biography. Large stretches of Melville's life are poorly documented; he didn't keep letters written to him, though some letters he wrote still exist. Delbanco is judicious on the question of Melville's homosexuality, by which I mean, he says neither yes nor no, and doubts the term is even very applicable in the 19th century.

Some interesting facts I learned:

I knew about Melville's use of the account of the whaling ship the Essex, but I'd never heard this: "In May 1839, just before nineteen-year-old Herman Melville sailed for Liverpool, J. R. Reynolds had published in the Knickerbocker Magazine an account of 'an old bull whale, of prodigious size and strength' that, like the 'Ethiopian albino...was white as wool,' and became the object of a vengeful hunt. Named after the island of Mocha just off the Chilean coast where he was first sighted, Mocha Dick was freakish not only in appearance but also in that he had repeatedly turned to attack his human pursuers." Mocha Dick!

'Total earnings from the American sales of Moby-Dick would ultimately come to $556.37, considerably less than Melville had realized from any previous book."

Though in general Delbanco doesn't want to say too much about Melville's politics, he does think that Ahab is strongly reminiscent of John C. Calhoun, both in look and demeanor.

Melville was always a heavy drinker, it seems, but after the failure of Moby-Dick and subsequently Pierre, he may have really overdone it. Again Delbanco doesn't have enough evidence to be certain, but Melville may very well have become by modern standards alcoholic. There were also signs of strain in the marriage brought on by the failure of his career as a writer, relative poverty, and the suicide of their oldest son, all of which were likely exacerbated by his heavy drinking. There were also concerns for his sanity. This in the 1860s and 1870s. He and his wife never permanently separated, though, and seem to have been reconciled by the end of his life.

Anyway an interesting and enjoyable read.

As for Moby-Dick itself, I was ahead for a while, but now I'm behind again. Onward!