Agatha Christie's By The Pricking of My Thumbs

"We've got far too much of everything." 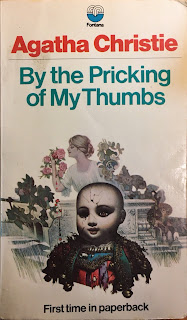 This was my first of Agatha Christie's Tommy and Tuppence mysteries, and I quite liked them as a detective couple. Tommy is the more pragmatic one; Tuppence (derived somehow from Prudence) the more intuitive one, the one more interested in just having adventures. (It would be dull otherwise to be a housewife...) This one comes out in 1968, and the couple are middle-aged with a grown daughter, but we hear allusions to their earlier adventures. (Espionage in war time!) The story starts when they go off to see Tommy's Aunt Ada, who's declining in a comfortable nursing home.

But as for the mystery! Tuppence says the above of the story at one point and I'm afraid it's true. Dame Agatha must have realized. There's a gang that's been pulling off spectacular heists for years--the Irish Mail, etc.--that Tommy hears about in his professional aspect; there's some maniac who's killing children around Sutton Chancellor; and there's another serial killer doing in elderly women in nursing homes. Because this is Agatha Christie and not, say, Ed McBain or J. J. Marric (John Creasey) I suspected that all these cases would tie together and they do, but it is just a little too much of everything...

Oh, well, it was still amusing, and I would definitely read another Tommy and Tuppence story. In fact I picked up N or M? at the same charity sale as this one and as it's earlier I should probably have read it first, especially as this one refers to it (I think) on several occasions.

Who: Professional is the Main Sleuth.

Tommy and Tuppence run a detective agency, though frankly there's not much sign of it in this one. 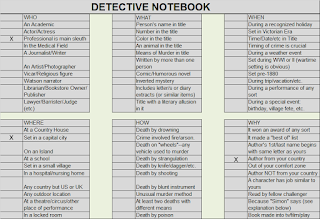