Czech author Karel Čapek's play R.U.R. is famous, as much as it is, because it's the origin of our word robot, which is related to the Czech word for serf or slave. It's a four act play about a company that makes a fortune building robots for industrial production. Those robots have already, when the play starts, transformed the world through low-cost labor. R.U.R., the name of the play, is the name of the company, that is, Rossum's Universal Robots (English even in the original Czech.)

In Act I, Helen Glory arrives at the remote island location where the robots are made. She's the daughter of the famous Sir Edward Glory (and is very beautiful) so she's immediately shown in to see Harry Domin the managing director of the company. Domin--and all the other directors, Alquist, Busman, Fabry, Gall, Hallemeier--comically fall in love with her on the spot, and so, even though they see right through her scheme to liberate the robots, they don't care and show her all their secrets.

But it isn't Helen who convinces the directors; it's the directors who convince Helen. That opening quote is Harry Domin starting to explain the history of Rossum's Universal Robots and all the great things they've achieved. In 1932, Old Rossum (Old Reason in the version I just read) discovers the key to manufacturing life. He putters around with his discovery, but young Rossum sees the potential and makes a fortune. In Act I, around the year 2000, both Rossums are dead, but the company is a worldwide powerhouse. People don't have to work any more; the world is rich; robots do everything.

Act II finds us ten years later: Helen is married to Harry Domin, the director, but not everything is Utopian in this Utopia. Humans, including Helen, are no longer having babies. Robots are breaking down faster. Worse there's a new manifesto calling for robot liberation making the rounds.

By Act III, the robots are in active rebellion, and in Act IV? Well, you'll just have to see for yourself what happens in Act IV.

It's definitely a case where the road to whatever that outcome was is paved with good intentions. Čapek writes of his play:


"General Director Domin shows in the play that the development of technology frees man from heavy physical labor, and he is right. Alquist, with his Tolstoyan outlook, believes that technology demoralizes man, and I think he is right, too. Busman believes that only industrialism is capable of meeting modern needs, and he is right. Helena instinctively fears all these human machinations, and she is quite right. Finally, the robots themselves revolt agains all these idealists, and it seems they are right, too."

So with everybody being right, how can anything go wrong? 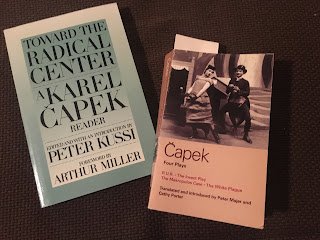 I read the play in the pink volume on the right (tr. by Peter Majer and Cathy Porter) from Methuen Press, but I'd read it previously in Catbird Press edition translated by Claudia Novack-Jones. I think I now prefer the Majer and Porter translation, but as far as I can tell with no Czech, both are fine. One major difference between the two is that the Majer and Porter translation makes clear the impact of the name Rossum for a Czech by changing the founder's name to Reason. (Rozum is the Czech word for mind/reason/intellect.) I'm not entirely sure how I feel about that; it seems a little heavy-handed, but maybe I'm just used to the name Rossum in the play.

Of course, why not have both? I do! With the exception of the play R.U.R., there's not much overlap between the two volumes. The Čapek quote above comes from the Catbird Press edition. Čapek died young, in 1938, of pneumonia; he'd suffered a crippling problem with his spine for his entire life. But not before he became world-famous and had been nominated for the Nobel Prize in Literature. 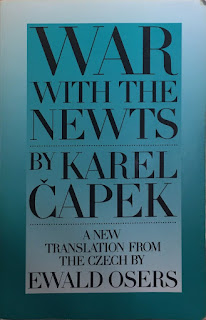 And the other thing that must be mentioned is that R.U.R., great in its own right, is also a first crack at themes that Čapek revisits in his brilliant (brilliant, brilliant, brilliant!) novel, War With The Newts. Don't miss it. I've probably just talked myself into rereading it in the the near future.

The play was first printed in Czech in 1920 (though the first production wasn't until January of 1921) and as such it's my first contribution to Simon and Kaggsy's #1920Club. Thanks to them for hosting!
Posted by reese at 12:55 AM