"There was something far from ordinary in all this, Shimamura told himself." 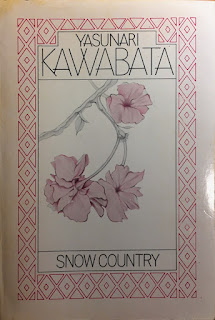 The thing that most struck me in reading Yasunari Kawabata's Snow Country was its extreme reticence: about emotional matters, about the backstory of the main characters, even, in the end, about the actual events that take place in the novel. When Shimamura muses the above quote, Komako has just visited him twice. We more or less know what's going on, but never precisely, and neither do the characters in the book.

Here's what I do know...Shimamura is a well-to-do Tokyo resident likes to go to Japan's snow country (in the western part of the main island) for a winter getaway. The story is set in the 1930s. On the visit at the beginning of the story, he sees a girl Yoko on the train, who is looking after an ailing man. (Who is he? We eventually learn his name--Yukio--but not much else.) They get off at his stop.

Once established in his hotel, Shimamura calls for a geisha. The maid in the hotel says that due to various parties in town, none of the town's geishas are available but that there is a part-time geisha who might be available. The introduction (by the translator Edward Seidenstecker) tells me geishas in small resort towns work more generally as prostitutes than even geishas in the city. The part-time geisha is Komako; Shimamura is interested in her, but not at first to sleep with her, because she seems too pure to be a geisha in that sense.

A relationship develops between the two of them. We see at least two examples of geishas who found rich patrons who were going to set the girls up for life; both examples fail, but no doubt Komako has hopes.

Shimamura comes and goes between this resort town and his urban home. Komako is eager and hopeful for his returns. We eventually learn, perhaps unsurprisingly, Shimamura has a wife in town.

Shimamura eventually learns of the existence of a former triangle of some sort between Komako, Yoko, and Yukio; he never learns the exact nature of it, and we don't either. Yukio eventually dies of tuberculosis; Komako feigns to not care, but we don't believe her. Shimamura is also attracted to Yoko, making Komako and Yoko (possibly) doubly rivals.

The ending is especially ambiguous; there's a fire, but we're not meant to know what happens to the principals, so I can't tell you...

I think if I had more experience with Japanese novels and culture, I could probably read between the lines a bit better, but I am quite convinced (and the introduction assures me I am not wrong) that the novel is meant to be mysterious. It is, quite successfully, I think. How well can you ever know somebody else? And yet I definitely feel that these people are there, that they have their mysteries they aren't telling and may not know themselves.

Most of Snow Country appeared in serialized form in the 1930s; a final section was added in 1947 and it appeared then in book form. Kawabata went on to win the Nobel Prize in 1968.