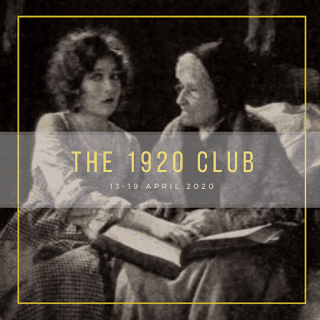 Monday is the start of Kaggsy's and Simon's 1920 Club and as usual for such an occasion, I've heaped up a pile of books which I will not entirely read... 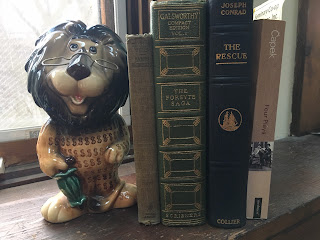 Starting with the book next to Hubert, that's:

Huneker was an American critic who died in 1921. I've read a good deal of his non-fiction--he's unjustly neglected, I think--writing well on classical music, painting and literature, with tastes that are quite progressive and European-oriented for his time. I've never read his novel, though I've had it for years. His autobiography Steeplejack also came out in 1920 and it's available online. Just in case I haven't got enough to read...

Another volume I've had for years. In Chancery is the second book in The Forsyte Saga and came out in 1920. I can't read that without reading The Man of Property, the first volume first, right? So I'm in the middle of that currently. I was going to have finished it earlier, but oh, well. I'm enjoying it.

One of three novels about Captain Lingard, together with Almayer's Folly and An Outcast of the Islands. It's the last composed and late in Conrad's career, but chronologically the first of the three stories about Lingard.

Czech author Karel Čapek's play is the origin of the word robot. The play was published in 1920, though the first production was in 1921. I've read this before but not (I think) in this translation. I read Act I standing in line outside the grocery store earlier today (sigh) and it's everything I remembered.

What looks good to you?

Thanks to Simon and Kaggsy for hosting!
Posted by reese at 7:22 PM