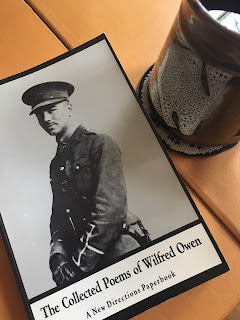 Bent double, like old beggars under sacks,
Knock-kneed, coughing like hags, we cursed through sludge,
Till on the haunting flares we turned our backs
And towards our distant rest began to trudge.
Men marched asleep. Many had lost their boots
But limped on, blood-shod. All went lame; all blind;
Drunk with fatigue; deaf even to the hoots
Of tired, outstripped Five-Nines that dropped behind.

Gas! GAS! Quick, boys!--An ecstasy of fumbling,
Fitting the clumsy helmets just in time;
But someone still was yelling out and stumbling
And flound'ring like a man in fire or lime...
Dim, through the misty panes and thick green light,
As under a green sea, I saw him drowning.

In all my dreams, before my helpless sight,
He plunges at me, guttering, choking, drowning.

If in some smothering dreams you too could pace
Behind the wagon that we flung him in,
And watch the white eyes writhing in his face,
His hanging face, like a devil's sick of sin;
If you could hear, at every jolt, the blood
Come gargling from the froth-corrupted lungs,
Obscene as cancer, bitter as the cud
Of vile, incurable sores on innocent tongues,--
My friend, you would not tell with such high zest
To children ardent for some desperate glory,
The old Lie: Dulce et decorum est
Pro patria mori.

This poem was first drafted in October of 1917, but then revised. It only appeared before the public in Owen's first book of poetry of 1920, edited by Siegfried Sassoon. By then Owen was dead, having died in action in France in the last week of World War I at the age of 25. I've used the text given in edition shown, edited by C. Day Lewis.

'Dulce et decorum est pro patria mori' is from Horace's so-called Roman odes (III.ii) and the old Latin lie means, "It's sweet and honorable to die for one's country." Interestingly the other poet I was considering for today was Ezra Pound, whose volume Hugh Selwyn Mauberley also comes out in 1920. In it Pound, too, goes after Horace: "Died some pro patria, non dulce not et decor..."

There are so many things one can note, but I find it particularly terrifying that he rhymes drowning with itself in the center of the poem.

The idea of blogging a poem on Thursdays comes from Jennifer at Holds Upon Happiness. She's much more reliable than I am. This week she's featuring Peter Everwine.
Posted by reese at 7:11 PM