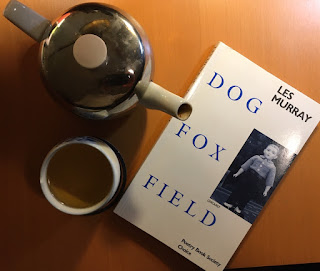 Dog Fox Field is a collection of poems by Les Murray that came out in 1990. Murray was born in 1938 and was by then a well-established poet. He died in April of last year, and was, until then, often named as a possible Nobel prize laureate.
His poems are mostly in a rough-hewn formal verse; he likes, for instance, ballad meter:

You can decide what that metaphor is about on your own.

Sometimes his use of sound is quite over the top: [From 'On Removing Spiderweb']

As those quotes maybe show, he has a sense of humor; anyway, he does for me. He says the nicest thing about accordions I've ever heard anyone say: ['Accordion Music'] "it can conjure Paris up, or home, or unclench a chinstrap jaw/but it never sang for a nob's baton, or lured the boys to war." Though I just Googled accordion sonata, and naturally there are a few. So some nob somewhere once tried to tell an accordion what to do.

I think he's better at longer length; this volume has a number of quite good narrative poems. And, in fact, my favorite volume of his (I've not read that much) is Fredy Neptune, a novel in verse of 250 pages. Fredy (Friedrich) is the child of German immigrants to Australia and he manages to become involved in practically every major event in the first half of the 20th Century. He fights on both sides in WWI, witnesses the Armenian genocide, joins Lawrence of Arabia, meets Banjo Paterson in Egypt, goes to Hollywood, outwits the Nazis, etc., etc.
Historical events show up in this as well. One is in the voice of a shako-wearing soldier of Austria-Hungary: ['The Lieutenant of Horse Artillery'] "...the length of a desperate ride/for my Emperor and King, as our Empire died/with its dream of happy cultures dancing in a ring." I don't think anybody at the time quite thought Austria-Hungary was a multicultural paradise, but maybe in retrospect? Another was based on the story/legend of Aimée Dubucq de Rivéry, which was new to me, but fascinating, and made a good poem.
There are also rural, agricultural poems. Murray's background was rural--he lived much of his life in small town New South Wales--and a number of his poems reflect that. These kind of went past me. Well, I'm not much of a farmer. Still there was one in the voice of an older heifer whose milk has dried up, and is about to be killed, that was very poignant. ['The Cows on Killing Day'] It starts:

All me are standing on feed. The sky is shining.
All me have just been milked. Teats all tingling still
from that dry toothless sucking by the chilly mouths
that gasp loudly in in in, and never breathe out.

I had a thought about a certain generation of male poets that like formal structures but avoid mellifluousness, using harder consonants (g, k, t) and word-pairings that imply a glottal stop, as if the euphony of Tennyson or Swinburne were somehow suspicious. Les Murray fits in here. I'm also thinking of Ted Hughes (b. 1930) or Seamus Heaney (b. 1939). Paul Fussell in his Poetic Meter and Poetic Form (1965) bad mouths Tennyson for his euphoniousness and not his Victorian sentimentality, which kind of shocked me when I first read it. (As it turns out I'm mostly OK with both euphony and Victorian sentimentality.) But this is an AusReadingMonth post, and I don't feel like pulling a bunch of other books off the shelf, so you'll have to imagine the examples I might use...

My vague sense is that Les Murray became more crotchety and conservative as he got older. Not much sign of it in this. He thanks Paul Keating in a brief acknowledgements section. I thought this quite a good volume, and Les Murray is a poet worth knowing better.

Two short ones to close. A wise, but not very Japanese, haiku:

Absolutely anything
is absolute to those
who see the poem in it.
Relegation is prose.