#NonFicNov - My year in Non-Fiction 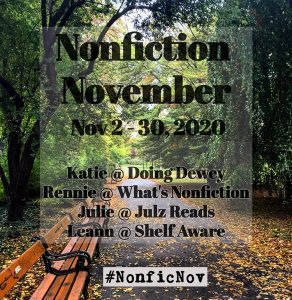 The opening week prompt is:

Your year in nonfiction: take a look back at your year of nonfiction and reflect on the following questions - What was your favorite nonfiction read of the year? Do you have a particular topic you've been attracted to more this year? What nonfiction book have you recommended the most? What are you hoping to get out of participating in nonfiction November?

Definitely the two best nonfiction reads for me were books I reread: (so I must like them, right?)

Both of those are works of literary criticism, though Essayism has some memoir blended in. Without intending it, this does seem to have been a year reading literary criticism. Part of that was because of the Moby-Dick readalong. I blogged about The Cambridge Introduction to Melville which was also in that category. I read Delbanco's biography of Herman Melville at the very end of last year.

Two other works of literary criticism I didn't blog about but I do recommend:

James Huneker's Egoists: A Book of Supermen. Huneker was a newspaperman, first in Philadelphia and then in New York, who died in 1921. He covered cultural issues: music, theater, literature. This volume is about writers of the time. The essay about Stendhal, whose diaries were just being published, I thought especially good. He also looks at Baudelaire, Huysmans, Ibsen, others. And, as the title might suggest, Nietzsche.

Vivian Gornick's The End of The Novel of Love. A collection of essays that had previously appeared, I assume, but I hadn't read any of them before. Good on individuals as different as Clover Adams and Grace Paley. She closes her essay on Willa Cather, "Today Jean Rhys seems dated, Virginia Woolf important, and Willa Cather wise." Which, though I'm not sure about Jean Rhys, otherwise struck me. The title essay was also very good.

A related, but not identical, category: author's memoirs. I read and blogged about Isaac Bashevis Singer's book on his early years in Poland, In My Father's Court. I thought it was very good. I also read his memoir of his first years in New York City, Love and Exile. I liked it, but I didn't find it quite as interesting.

Virginia Woolf's A Room of One's Own

Mary Wollstonecraft's A Vindication of the Rights of Women

Not much history this year, which surprised me. I read Daisy Dunn's joint biography of the two Plinys, Shadow of Vesuvius. It was good, but I didn't blog about it. Some other classical history, as well.

I mostly avoided contemporary issues at book length--I couldn't much bear it. I did read Zadie Smith's short book of Covid essays, Intimations,  because I read pretty much everything of hers, but my favorite essay in the collection was the one that had the least to do with what's going on now. I also read Sarah Burns' book The Central Park Five. Not a brilliant book, but a good introduction to the facts. What a miscarriage of justice. Though the man in the White House (as of today, but hopefully not much longer) still doesn't acknowledge it, or his part in it.

The complete collection of my nonfiction posts for this year can be found here.