It's time for a Classics Club spin again, number 25. I decided I didn't want to shuffle around those remaining books from my first Classics Club list one more time. In a moment of idleness a while back, I started assembling some categories of books that I might put on a second Classics Club list, and I made my list mostly from that.

After being unable to find Mary Wollstonecraft for the last spin, I decided I'd better have all the books in hand: 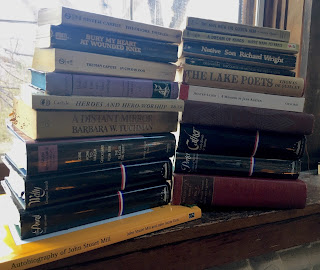 The Categories and the Books

Women Authors from the Library of America

I've read parts of all these books, but there's still good reading in them!

One of Ours is actually from my current Classics Club list.

My home town has produced some classic literature. Most of the good Toronto books are perhaps not quite old enough to be considered classics yet.

James T. Farrell is better known for Studs Lonigan, which got the Library of America treatment, but that's grim and I didn't feel like rereading it just now. A World I Never Made is the first of the Danny O'Neill series. In my first list, I didn't allow rereads, but I've decided this time I will. If I haven't read a book since my 20s, well, it's like it's new all over again...Except for the Petrakis, these are all rereads.

Clearly I was already thinking of adding some non-fiction to the new list, but then Deb assembled a list of non-fiction classics with help from the community. Why, I have some of those!

Other potential categories that didn't show up this time were Russians, plays, and Trollope. Yet to come!