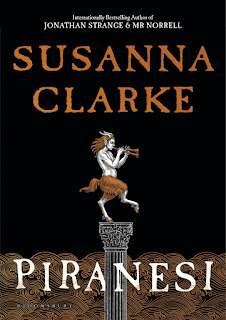 I don't know about you, but I've been waiting for this book for what feels like a very long time. Well, it was 2004 when Susanna Clarke's previous (and first) novel, Jonathan Strange & Mr. Norrell came out.

Piranesi is a name for the main character of the novel; the novel is told in the form of his diaries. It's clear something is going on that we as readers don't understand:

When the Moon rose in the Third Northern Hall I went to the Ninth Vestibule to witness the joining of three Tides. This is something that happens only once every eight years."

That's the opening of the novel, after a couple of epigraphs. The drama in the book comes from understanding why Piranesi writes in this odd voice, where he is, what this odd world is like, even who he is. It's nearly impossible to say anything without being spoiler-ish. So, first, the important question: if you loved Jonathan Strange & Mr. Norrell, as I did, will you want to read Piranesi? I say, very definitely, yes. The two novels are quite different stylistically: Strange & Norrell was pretty maximalist, and this is nearly minimalist, but I thought Piranesi very good, and pleasingly different.

I'll try to be good, but after this, there may be spoilers...

We learn pretty quickly there may be only one other living person in this world. Piranesi refers to him as the Other. There are a number of skeletons, thirteen to be precise, and Piranesi refers to the person who might be reading his diaries as Sixteen. Where do the skeletons come from? Does Sixteen even exist and who might Sixteen be?

Piranesi sees the Other twice a week for no more than an hour at a time. The Other uses a diction much more contemporary than the odd formality of Piranesi. It's the Other who gave Piranesi his nickname; Piranesi doesn't really have a name for himself. (The Other makes up the name from Giovanni Piranesi, creator of the Carceri d'Invenzione, which are something like the halls our Piranesi inhabits.) The Other is another mystery in the novel, since he's so clearly not of the same world as Piranesi. When Piranesi needs a flashlight or new shoes, the Other provides them. But in the world that Piranesi inhabits, he's helpless.

Piranesi finds bits of another diary, quite different from his own; it seems to refer to a different world with different events. Eventually two 'Sixteens' show up. The Other warns Piranesi to avoid them. One is a man, and eventually the Other doesn't seem particularly interested in him; the other is a woman, this is the one the Other is particularly concerned about.  Who are these two Sixteens? What is their relationship to the Other? Such are the questions.

Gradually we learn that the mention of eight years in the opening line is pretty horrific.

One of the things that's interesting about the novel is how it returns to the themes of Jonathan Strange & Mr. Norrell. In her earlier novel, the two magicians are investigating a world they only half understand; in Piranesi, there are likewise two individuals investigating something they don't understand. The two magicians/investigators have a complicated relationship in both novels. Piranesi's halls may be something like John Uskglass' faery domain, except there is no John Uskglass in this. Jonathan Strange & Mr. Norrell is historical, while this is set in the present, but there are otherwise definite parallels.

One of the two epigraphs to this novel was by C. S. Lewis, and there are other allusions to Lewis, most of which went past me, I admit. It's been a long time since I read The Chronicles of Narnia. On the other hand, I was totally up on the allusions to Doctor Who. But the other epigraph was by Laurence Arne-Sayles, who, as it turns out, is a character in the novel:

"People call me a philosopher or a scientist or an anthropologist. I am none of those things. I am an anamnesiologist. I study what has been forgotten. I divine what has disappeared utterly. I work with absences, with silences, with curious gaps between things. I am really more of a magician than anything else."

Except for a slight modernity to its tone--the use of the word anthropologist, say--this could easily have been written by Mr. Norrell.

And I don't think I'll say anything else except, I liked it very much.