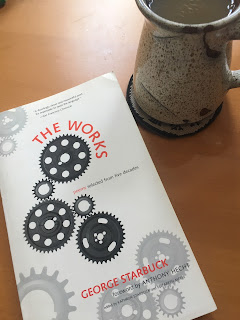 The Rime of the Ancient Mariner: the condensed version.

I'm showing it in Courier, a monospace font, to emphasize the lines. Starbuck wrote a series of poems like this, called SLABS, Standard Length And Breadth Sonnets. He wrote a number of other shaped poems ("Sonnet In The Shape of A Potted Christmas Tree") and light verse. And maybe some serious poems, too...

Annoyingly the editors did not actually include this in my selected Starbuck shown above; I have no idea where I first came across it; it's written in an old commonplace book of mine. In googling to check the text, I found it difficult to come by on-line. (Googling "Starbuck Last Straw" turns up worthwhile initiatives about plastic. I had to include a line to get anywhere. And the last few lines I couldn't find at all.) But it seems it appeared in his final collection, Visible Ink, 2002, after his death in 1996.

Bonus Poem: this *is* from The Works and is one of my favorite double dactyls:

"Nomine Domini,
Theotocopoulos,
None of these prelates can
Manage your name.

Change it. Appeal to their
Hellenophilia
Sign it 'El Greco.' I'll
Slap on a frame."

It's National Poetry Month in the Canada and the U.S.! 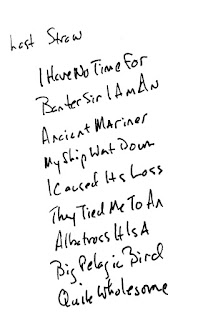 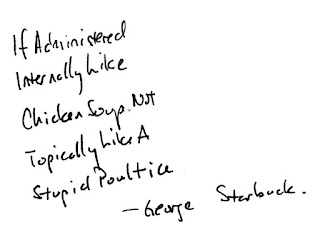