and that was perfect, for I would have rotted
beside the luke-warm ocean I imagined.

Yet no way was its cold ascetic
as our monk-fished, snowed-into Atlantic;

no beehive hut for you
on the abstract sands of Malibu --

and underwent the bluster of the day:
but why would it not come home to me?

Atlantic storms have flensed the cells
on the Great Skellig, the steps cut in the rock

I never climbed
between the graveyard and the boatslip

are welted solid to my instep.
But to rear and kick and cast that shoe --

beside that other western sea
far from the Skelligs, and far, far

from the suck of puddled, wintry ground
our footsteps filled with blowing sand.

Via Wikipedia I came across this lovely reminiscence (by Scott Bradfield for the LA Times) of Brian and Jean Moore and their house in Malibu. The house was sadly destroyed in the Woolsey fire. And via that I realized there was a Seamus Heaney poem for Brian Moore set at the house. It's from Station Island (1985) 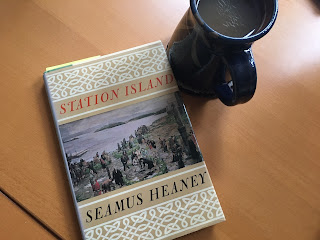 which was likely the first collection of Heaney's poems I read.