Neither Out Far Nor In Deep

The people along the sand
All turn and look one way.
They turn their back on the land.
They look at the sea all day.

As long as it takes to pass
A ship keeps raising its hull;
The wetter ground like glass
Reflects a standing gull.

The land may vary more;
But wherever the truth may be--
The water comes ashore,
And the people look at the sea.

Robert Frost's book A Further Range came out in 1936. 'Neither Out Far Nor In Deep' is from that book.

In a rather click-bait-y essay 'The Other Frost', Randall Jarrell calls it one of Frost's ten or twelve best poems; he doesn't include the ones you might guess. Is it better than 'The Road Not Taken' or 'Stopping By Woods'? Hmm, I don't know, but I do like it.

Jarrell goes on to say, in a different essay, 'To The Laodiceans':

'It would be hard to find anything more unpleasant to say about people than that last stanza; but Frost doesn't say it unpleasantly--he says it with flat ease, takes everything with something harder than contempt, more passive than acceptance. And isn't there something heroic about the whole business, too--something touching about our absurdity?'

The Poem For A Thursday meme was invented by Jennifer at Holds Upon Happiness; she, too, has a shore poem this week, by Emily Dickinson. Brona has a 1936 poem, Parrots by Rex Ingamells. 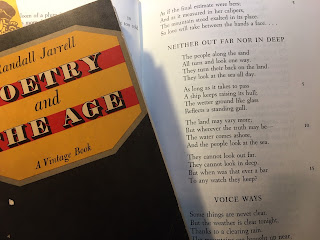