Monday is start of Kaggsy and Simon's biannual year reading project; this year it's 1936 we'll be time-traveling to. Immediately after they announced the upcoming year, I created a gigantic list of books I had read, could read, might conceivably read. I've pared down, but still have more candidates than I actually will read: 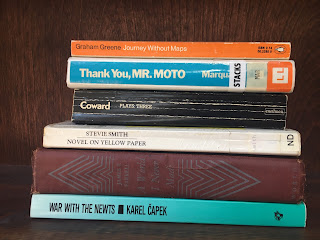 That's (from top to bottom):

Graham Greene's Journey Without Maps
John P. Marquand's Thank You, Mr. Moto
Noel Coward's Tonight at 8:30 (in a collection with other plays)
Stevie Smith's Novel on Yellow Paper
James T. Farrell's A World I Never Made
Karel Čapek's War With The Newts

The bottom two would be rereads. In fact it would be the fourth (fifth?) time I've read War With The Newts, but that would be OK, it's worth it. I read Čapek's R.U.R. for the 1920 club a year ago, and I've been thinking about rereading War With The Newts since then. I'm unlikely to read them all, but I might! I'm better than halfway through the Stevie Smith currently. There are a few other things that might slip in in their place.

James T. Farrell is likely the obscure one, which makes that particularly tempting. He should be better known. He's a Irish Catholic Chicago novelist (though he later moved to New York in a fit of pique with Chicago.) He died in 1979. A World I Never Made is the first of his Danny O'Neill series, though Farrell is more famous, as much as he is, for his Studs Lonigan novels, which got the Library of America treatment a few years back. They're very good and he really oughtn't be so little-known.

I've read one 1936 novel since I started blogging: Graham Greene's A Gun For Sale. It's reviewed here.

But I definitely will *not* be reading John Maynard Keynes' General Theory, despite having read some Keynes and Keynes-related things recently and the temptation to do so...

Have you read any of these? Which look good to you? Do you have plans for the 1936 club?

What I actually did read (most likely different from above):