Zachary Carter's The Price of Peace (On Keynes & Keynesianism)

"Keynesian economics was formulated as a defense against fascism...But Keynesianism was also developed to prevent war, and it remains one of the great tragic ironies of intellectual history that the very catastrophe Keynes had attempted to avert for nearly two decades [in 1939] would be the event that finally demonstrated the viability of his economic ideas on the world stage."[p.309] 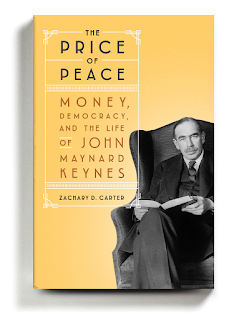 This book has gotten a lot of buzz--see Carter's website for a list of the accolades--and I have to say I think they're deserved. But it's better thought of as a biography of Keynesianism than of Keynes. Naturally Keynes himself would be important in such a book. It starts with a short introductory episode where he meets his wife-to-be, in 1922, but it doesn't really go back in time very much. No parents, no birth, no childhood. Not much about his youthful hound-dog homosexuality. A little bit about his Bloomsbury connections, because who doesn't like a bit of Bloomsbury gossip? (Vanessa Bell really didn't like his wife.) But there's not much at all in the book about him before 1914, and Keynes turned 31 that year.

But you could say that's when his real intellectual life began.

He'd studied math, working on probability theory, at Cambridge, with Bertrand Russell among others. Such a thing as an economics department scarcely existed at that point in any case, but Keynes' background was in analytic philosophy more than anything else. When the First World War started, Keynes ended up in Treasury, where he was critically important to Britain's ability to finance the war. His brilliance and indispensability were recognized, he moved up, and by the time of Versailles, he was a key player. He was in the room when the Big Three--David Lloyd George, Woodrow Wilson, and Georges Clemenceau--were having 'private' discussions. He quickly realized that the terms of the Versailles treaty were likely to be poisonous and he could do nothing about it. So he quit before the terms were finalized.

And wrote The Economic Consequences of the Peace. (Which will be war again, he said. And was right.) This book turned out to be an enormous bestseller and made Keynes quite a lot of money, but its primary intellectual effect in the short term turned out to be as one of the contributing agents to the U.S. rejecting the League of Nations, not Keynes' intent at all.

In the 1920s Keynes made money. It's like somebody said, if you're so smart, why aren't you rich? Keynes said, good question, and went about fixing that. He worked as a well-paid journalist; his writing can be delightfully witty. He invested and was enormously successful in his investments, leading him to be the financier of Bloomsbury: he funded Hogarth press until Virginia Woolf's books started to sell; he made sure that Duncan Grant had enough money to paint, etc., etc. But these are also the writings in which Keynes is beginning to work out the economics of Keynesianism, and its purposes; to stop fascism and prevent war. Forward thinking in 1925 might have achieved both; it was only later that it was one or the other. Carter struck me as both lucid and astute on Keynes' intellectual development at this point. Keynes' thinking is not the same at all points in time.

Keynes worked for a stint in Ramsay MacDonald's Labour government, but in the end with little effect; he has more intellectual impact on (and becomes friendly with) FDR and the American government, but worries that he's mostly seen as a witty journalist. He holes up Cambridge with some early disciples (Joan Robinson seemed particularly interesting to me from this period) and works out the elements of The General Theory, the main statement of his ideas. That book is still percolating through the intellectual world when the Second World War starts, and Keynes is called back once again to sort Britain's wartime finances.

He's again crucially important to the war effort, and is a key player at the Bretton Woods conference, but Keynes had already had his first heart attack in the 1930s, and by the end of the war, he's dying, and dies in 1946.

The book is only 2/3rds of the way through, though. I found its coverage of the next twenty-five years fascinating. Keynesianism won as an intellectual discipline; "we are all Keynesians now" wasn't first said until later, but might have been said as early as 1946. But under the pressure of McCarthyite stooges and loyalty tests, Keynesianism split into left and right factions, with some players moving from one to the other camp. Keynes recognized fiscal stimulus can be achieved by building houses, building highways, or building the machines of war; he had preferences, though, and not for the machines of war. For Carter, John Kenneth Galbraith is the key figure in this period, but also Paul Samuelson, Joan Robinson again, even Milton Friedman. Friedrich Hayek is the one arch-non-Keynesian.

Another ongoing question is, to what extent is Keynesianism a purely mathematical project? Keynes himself was a brilliant mathematician, but didn't always depend upon it. It's not in Carter's bibliography, probably because it's too introductory, but I suspect this part is a bit under the influence of Heilbroner's Worldly Philosophers.

The book carries through to the recovery from the Great Recession. I found its coverage of the last years the weakest. Carter is a financial journalist, not an academic, and as such, writes well. His most prominent affiliation seems to be Huffington Post, and I assume he's pretty lefty. (Well, I am, too.) But he tends to gloss over those later conservative presidencies and then attacks those of Bill Clinton or Obama from the left. Sigh. A little perspective, please.

Ah, well. It's very good and pretty fascinating on the whole. It's quite readable; no math required. Because it covers a lot of ground, it's consequently a bit thin in places. But then that's on me: one of these years I'll read Skidelsky. But until then, this was very good.