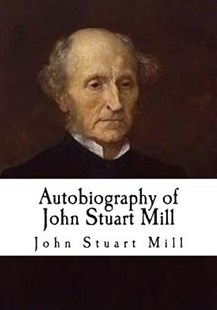 John Stuart Mill's Autobiography only appeared after he had passed away, in 1873. It was written in stages; the first and largest part in the 1850s, later parts in a couple of goes in the 1860s. Mill married Harriet Taylor in 1851, and she edited that first portion, but she herself died in 1858, probably of tuberculosis. The later sections reflect on her importance to his life and thinking after her death and also on his brief parliamentary career.
It's the earlier sections, though, on his earlier life, that are the most comprehensive, and the most interesting. His youthful education is the wackiest part. Mill always insisted he was not by nature a genius; that it was only his unusual education that enabled him to achieve anything. That education was definitely unusual.
His father was James Mill, a fairly important British intellectual in his own right, and the author of an important work on the governance of India, but perhaps more notably, a close friend of David Ricardo, the economist, and of Jeremy Bentham, the inventor of Utilitarianism. Both of those august gentlemen were around the house while young Mill was growing up.
Mill, Sr., had some definite views on education and did the homeschooling himself.
It's hard to imagine them being implemented now. Should you be in possession of three-year-old whom you're planning to educate, you might find some hints, though more likely you'll find counter-examples you'll want to flee like the wind. Young Mill in the book insists his childhood was happy, though one might wonder. It did involve learning classical Greek from the age of three and Latin from the age of eight. Since Liddell and Scott had not yet written their dictionary, and the only Greek dictionaries that existed were Greek to Latin, when young John wanted to know the meaning of a word in Greek, he had to ask his father. It seems to his father's credit, he had no objection to being interrupted from whatever he might be trying to do to explain the meaning of Άνθρωπος.
It also involved separation from other children his age, because of their potentially corrupting influence. Again Mill says he didn't mind this and enjoyed long walks by himself. (He did have a bunch of younger siblings so there might have been somebody to play with.) It also seems young Mill got to spend a great deal of time with his father.
As for his mother, presumably he had one, but you wouldn't know it from this book. According to another biography I got from the library, by the 1850s, he was somewhat estranged from his mother, and some of his siblings, because of the way they treated Harriet Taylor, who had become his wife by then.
Perhaps unsurprisingly, this upbringing led to a psychological crisis at age twenty. He contemplated suicide: "I frequently asked myself if I could, or if I was bound to go on living, when life must be passed in this manner." You'll be glad to hear he came out of it by reading a book. (Jean-Francois Marmontel's Memoires. I'd never heard of it. Must be powerful stuff.) He rethought--a bit--the idea of happiness he'd received during his Benthamite upbringing.
It may also have helped that he met a girl. Harriet Taylor was a year younger than him and considered a great beauty. (As you can see, Mill himself was not.) Even more importantly, though, was she was his intellectual equal, even, as he says in the autobiography, his superior. The only downside was that she was already married. They began an intimate (but innocent, Mill assures us) friendship and intellectual partnership that lasted until her death in 1858 and was only regularized, as it were, by their marriage in 1851 after Harriet Taylor's first husband died.
As we get into the period of Mill's own intellectual productions, the autobiography becomes swifter. Mill served one term in parliament. Not all that much is said about it. (He dismisses his maiden speech.) He was a strong supporter of increased home rule for Ireland, and, I was amused to discover, claims some credit for the origins of 'responsible government' (or home rule) in Canada: after the Upper Canada Rebellion, Lord Durham came to Canada to investigate and issued a fairly liberal report that led to the first bits of self-government in Canada. Mill was a strong supporter of Durham.
Mill was also friends with Carlyle which Mill admits was a bit of an odd couple pairing. Mill's maid was the one responsible for burning the first draft of Carlyle's French Revolution.
It's pretty readable. A slightly orotund prose style, but for a philosopher or a political economist, it's downright snappy.

"It was in the same year, 1819, that he [my father] took me through a complete course of political economy." Mill was then thirteen.

"I am thus one of the very few examples, in this country, of who has not thrown off religious belief, but never had it."

"They [my books] were always written out at least twice over; a first draft of the entire work was completed to the very end of the subject, then the whole begun de novo, but incorporating in the second writing, all sentences and parts of sentences of the old draft, which appeared as suitable to my purpose as anything I could write in lieu of them."

[Summarizing the creed held by Bentham and his father.] "In psychology, the fundamental doctrine was the formation of all human character by circumstances, through the universal Principal of Association, and the consequent unlimited possibility of improving the moral and intellectual condition of mankind by education."

"Aiming thus at something else, they find happiness by the way."