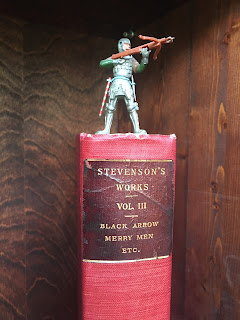 It seems to be Stevenson week here at Typings.
The Black Arrow: A Tale of the Two Roses is a boys' adventure set during the War of the Roses. It was serialized in Young Folks in 1883, after Stevenson's Treasure Island and before Kidnapped, a good period for Stevenson. This one was a great success as a serial, but since then has never been as popular. Is it less good than those? Hmm, maybe, but still it's an awful lot of fun.
Young Dick Shelton is the ward of Sir Daniel Brackley. Henry VI is king--for now--just recovered from one of his periodic fits of madness. A black arrow fells Dick Appleyard, an archer in the service of Sir Daniel and the threatening poem I quoted above is attached. Sir Daniel is named as another of the oppressors; one of the griefs is the death of Henry Shelton, Dick's father. What does all this mean for young Shelton?
At first he's loyal enough to Sir Daniel, who does look after him. Sir Daniel's a competent military leader, good with his troops and decisive in battle, but he's also intemperate--well, who isn't in 1460?--greedy and more attentive to his own interests than those of England.
A battle is brewing between Lancastrians and Yorkists. The partisans of the Black Arrow are stalking the countryside. Sir Daniel has captured John Matcham--well, we quickly learn that John is really Joanna, a rich heiress. She escapes, runs into young Shelton traveling cross-country with a message. He still sees her as John. They fight, become friends; he saves her; she saves him (he can't swim). It's not giving much away to say you know how this one goes.
That's all in the first fifty pages. But I think I'll stop there with plot summary. To carry on would be put me in competition with Stevenson in telling a story, not a good place to be. It is a rollicking good yarn, with lots of adventure.
Historical fiction requires a few famous individuals to show up: this one has Richard Crookback, that is, Richard of Gloucester, Richard III to be. Stevenson admits to fudging his dates; Richard should be about eight when the novel takes place, but here he's a young, but effective, soldier-captain. It's a good portrait, and well, dates, shmates. Catesby also makes an appearance. I know him less from the actual historical record than from his turn in Shakespeare. I suspect that's probably true of Stevenson, too, though Wikipedia says Stevenson did read the Paston Letters for background.
Anyway, like I said, rollicking. Perhaps the occasional archaizing in the language has put people off?

"Ye be mortal small made, master," said Hugh, with a wide grin; "something o' the wrong model, belike."

Hugh is talking to John/Joanna. He clearly sees through her disguise, even if young Shelton doesn't. Anyway, there are passages like that. This sort of thing doesn't bother me, maybe even sets the mood. But this was the first book in my complete Stevenson--which I have read about half of--that I had to cut the pages.

The novel is dedicated to his wife, which they both thought a great joke, since it was the one she wouldn't read. She had no tolerance, it seems, for tales of knights in armor.

The Other Reader's knight is a bit grizzled for young Shelton, but since Shelton fights with a crossbow for half the novel, there he is on top of the volume.

The first of my books of summer, and one actually from the list!