"In 1934 and 1935, [Milman] Parry spent fifteen months in Yugoslavia, driving his black Ford sedan from town to town with his young assistant Albert Lord. They stopped at village coffeehouses, spread word they were looking for local singers, recorded the songs they sang while strumming their rude, raspy one-string gusles." 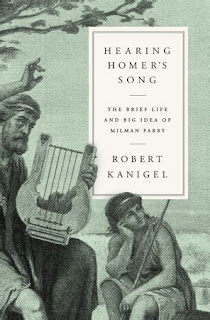 That field work upended Homeric studies and indeed the study of pretty much all traditional epic poetry: The Song of Roland, The Nibelungenlied, Beowulf, etc. I'd earlier read Robert Kanigel's biography of the Indian mathematician Ramanujan, The Man Who Knew Infinity, and quite enjoyed it, and when I saw his new biography was of Milman Parry, I knew I would want to read it.
Parry was born in 1902 to a not especially successful druggist in Oakland, California, the youngest of five children. He did well in his Oakland high school, and went to the University of California, Berkeley, just a couple of miles up the street from where he grew up, where he majored in Classics, but also studied under Alfred Kroeber, the important Native American cultural anthropologist. (And father of Ursula Kroeber Le Guin.)
From there he went on to get his doctorate at the Sorbonne, but as a Berkeley undergraduate he'd impregnated his girlfriend, Marian Thanhauser, also a student. The two married, and the young family went off to Paris and three years later he was Dr. Parry. He taught a year in Des Moines, Iowa, but then got an appointment at Harvard, taught there, and cadged up enough grant money to spend a total of eighteen months, over two trips, with a team that included Albert Lord and Nikola Vujnović, recording traditional singers in the kingdom of Yugoslavia.
And in 1935, he died, from a bullet to the heart, in a Los Angeles hotel.
There's your basic facts. Why do we care? I cared because of that upending of Classical scholarship, and Kanigel is pretty good on its importance and the history of how it came about. Parry started his investigation with the use of epithets in Homer--rosy-fingered dawn, fleet-footed Achilles, Poseidon the earth-shaker--and what that might tell us about the methods of composition. At Parry's thesis defense, one of the outside readers, a professor of Slavic literature, told him he should go listen to traditional singers in Yugoslavia and so he did, recording hundreds of hours of traditional song, until he was able to demonstrate that a Homer could compose a poem of many thousands of lines, using the technique of oral composition, on the spot, as it were. (As long as you think of that spot as a week or two's worth of recitation.)
The standard exposition of the Parry-Lord thesis (as it's called in the Classics biz) is Albert Lord's The Singer of Tales, which is readable by a general reader. Well, pretty readable. That is, just now glancing over my copy, if you don't mind texts in Greek, both archaic and Byzantine, and Serbo-Croatian. And charts. And musical notation. And footnotes. And appendices in small print. And uh, oh well, Kanigel does actually do a nice job, possibly as good a job as can be done, explaining the Parry-Lord thesis if you're going to eschew all that. (But if you do want to read Lord, it seems you can read the 3rd edition, Harvard University Press, on-line for free. It really is quite good, and important, too.)
The other reason, though, we're supposed to care is that rather noir-ish bullet to the heart. Was it accident (as the police determined) or was it suicide? Or was it murder! Mrs. Parry was the only other person in the hotel room at the time. There's no evidence any longer as to the death. Kanigel spends a lot of time speculating about the state of the Parry marriage; there's not a lot of evidence about that either. Was Marian Parry bored and unhappy as the wife of an impoverished grad student stuck with a child in a Paris suburb? As the neglected, frequently slighted, faculty wife in Harvard? (She was Jewish, though not practicing, and Harvard was rife with anti-Semitism in the early 30s.) Or later, raising two kids, isolated in Dubrovnik, while her husband was off on week-long collecting jaunts in that Ford through the Yugoslavian countryside? I have no doubt she was unhappy. Was she murderously unhappy? Enh. We'll never know.
There's a certain sort of book these days--I think of Erik Larson's Devil in the White City as the ur-example--that thinks the best way to palliate some quite fascinating intellectual history is to throw in a murder, or three thousand. These books clearly sell, and most readers probably do enjoy the true crime part. But as for me, I wanted more about the Burnham plan for Chicago in Larson and less about the psychopath, and here I wanted more about guslars and recording equipment and, even, more about the hephthemimeral caesura, and less idle speculation about things unknowable. Sure I read about plenty of murders, but I prefer them decorous, not too bloody, with six well-differentiated suspects, preferably isolated in a country house, with a clear resolution by the end of the book. True crime? Bleah. But I suspect I'm in the minority.
Anyway, I liked the book, but I wanted more of some things and less of others...
That's Avdo Međedović with a gusle on the cover of The Singer of Tales. We meet him in Kanigel's book; he'd been a butcher and a soldier and in 1935 was a farmer in the Montenegrin village of Bijelo Polje; he'd been shot in his soldiering days and was unable to raise his right arm above his shoulder; and he's the climax of that part of the book I was most interested in: he recites, composes really, at the rate of four hours a day for over a week, the thirteen-thousand-line epic Osmanbey and Pavičević, published subsequently in a translation by Albert Lord, roughly the length of the Odyssey, and thus was the key to demonstrating what Milman Parry went to Yugoslavia to demonstrate.
And is my visit to Montenegro for 2021... 😉 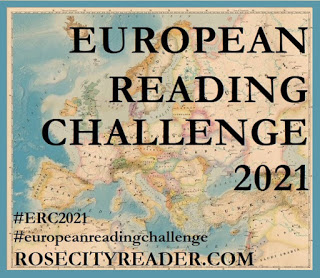