Book Beginning: Cynthea Masson's The Flaw In The Stone 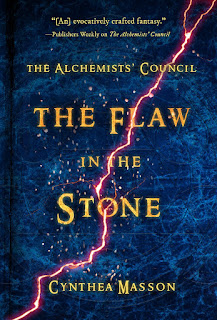 Genevre had merely wanted time alone to contemplate matters. Within months, she would turn thirty, thus reaching her Day of Decision. Like all in the Flaw dimension -- whether rebel alchemists or outside world scribes -- she would formally announce her choice on that day.


...is the beginning of Cynthea Masson's The Flaw In The Stone.

This second volume of a planned trilogy has just come out. I raced, very enjoyably, through the first volume The Alchemists' Council last week. There's a conflict between the Alchemist's Council and the Rebel branch that has philosophical overtones about free will: Masson is, according to the author bio, a professor with an interest medieval mysticism as well as the work of Joss Whedon. (Buffy the Vampire Slayer, among other things.)

The first volume took a while to get going--fantasy trilogies need time to explain themselves before starting, it seems, though that wasn't true of Lord of the Rings. This one looks like it will get going a little faster.

Book Beginnings on Fridays is a bookish meme hosted by Gilion at Rose City Reader. To play, quote the beginning of the book you're currently reading, give the author and title, and any thoughts if you like. They're predicting freezing rain tonight. Good thing I've got a good book!
Posted by reese at 10:23 PM