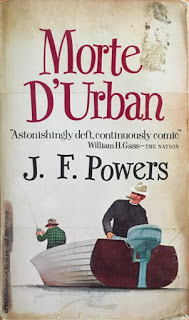 What makes a good man and a good priest? That may be the question Powers is asking here--though I'm not certain. But it's the question I was left with when I finished the novel.

If that's what the novel is asking, it's not so strongly put as something like Graham Greene's The Power And The Glory (good priest) or Dostoevsky's The Idiot (good man). Instead J. F. Powers has written a funny novel, sometimes very funny, that leaves you, the reader, to decide if you're interested in the deeper question. But you don't have to care and you can still enjoy the book. The blurbs on my edition talk a lot about the satire--crisp, bitter, and sharp, it tells me--but I think that takes a limited, though not entirely wrong, view of the book.

The novel came out in 1962 and won the National Book Award (U.S.) in the following year.

The story is this: Fr. Urban Roche is a popular preacher of the (imaginary) Clementine order. He's based in Chicago and is in demand to do revivals at various Catholic churches around the midwest. It's 1960 or thereabouts; John XXIII is pope and Senator Joe McCarthy is dead. Near the beginning of the story Father Urban is transferred from Chicago to a Clementine retreat in central Minnesota. Urban sees it as a demotion and a place where his real skills will not be used. He aspires to be the Father Provincial, the head of the local Clementine district, based in Chicago. But most of the novel takes place in small-town Minnesota.

One of the other characters calls Father Urban an 'operator' and it's true. It's the vita activa and not the vita contemplativa for Father Urban. Not that such high-falutin' terms ever appear. He pursues wealthy donors, tries to get a new church built for a crowded local parish, wangles a nine-hole golf course for the retreat so they can attract more (and a higher class of) retreatants.

He also tries--and mostly fails--to do good in smaller ways: to get Father Jack to write brochures that are more up-to-date, more relevant to parishioners, to help Katie, an Irish maid, who's lost her wages in gambling with her employer and is homesick, to moderate the vindictiveness of Billy Cosgrove, the rich man who's their major donor.

The satire comes from the hapless ineffectiveness of the church in most things, stumbling over small motives and petty politics. But isn't that always the way of the world? Maybe Father Urban is still a good man. From trying to do good and avoid evil, Father Urban has to twice (!) swim home across a cold Minnesota lake. But those two times are both successes for him, of a sort.


Father Urban had preached a great many thrilling sermons on saints who had really asked for the martyr's crown, but he believed that there were others from whose lives we might learn more that would serve us better in the daily round. What of those who remained on the scene and got on with the job? The work of the Church, after all, had to be done for the most part by the living. There was too much emphasis on dying for the faith. How about living for the faith?

Despite the title Father Urban is alive at the end of the novel, and has been elected the Father Provincial, though by then his health is so poor he's unable to be much of a force for change. Things muddle on. Father Jack is doing a Catholic children's edition of King Arthur and his knights, and the title is more an allusion to Malory's Morte D'Arthur. Like Malory, there's a distinct sadness at the end of the book, and you wonder just when was that moment of high glory? First there was scrabbling to get established, and then the brotherhood broke up to go questing, and then it was over. Yet the glory must have been in there somewhere.

Funny, sad, and thought-provoking.
Posted by reese at 9:18 PM