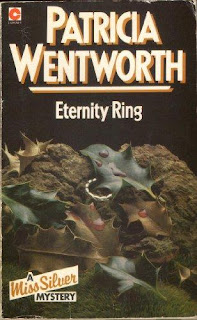 Maggie Bell stretched out a hand and picked up the telephone. It was a thin, bony hand with jutting knuckles and it moved with a jerk. Maggie did everything in jerks. She was twenty-nine years old, but she had not grown or developed very much since she had had what was always alluded to with some family pride as her "accident." A car had knocked her down in the village street when she was twelve.

Patricia Wentworth writes well about spinsters or those that are doomed to become them. Nowadays such a character would be treated differently, of course. In fact, it's likely enough Maggie will be either the murderer or the victim. This is a terrible generalization, but I feel like I've read enough Miss Silver mysteries to get away with it; I was briefly worried I was about to finish the whole series, but I see there's still a couple I haven't read. Whew.

Anyway, I liked the opening, but I was prepared to like it.

From page 2, a bonus quote:

Miss Cicely brought her real nice books, and not the improving kind neither. Maggie had a sharp eye for being improved, and an impenetrable armor against it.


That makes Maggie seem much more likeable, at least to me...

Book Beginnings on Fridays is a bookish meme hosted by Gilion at Rose City Reader. To play, quote the beginning of the book you're currently reading, give the author and title, and any thoughts if you like. It's snowing here in Toronto. Good day to curl up with a mystery!