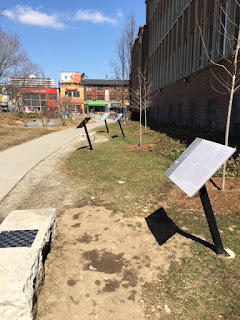 A couple of blocks from my house there are a series of signs in a parkette about Matt Cohen, the Canadian novelist who died young-ish of cancer in 1999. One of the signs gives his biography; it tells us he won awards, that he helped found the Writers' Union of Canada, that he was chair of the literary committee of the Toronto Arts Council, and that he lived within a few blocks of these signs for 'most of his writing life.'

The other signs have quotes from three of his books; one of those books quoted is The Bookseller.

The Bookseller is the story of Paul Silvers, who narrates and becomes the titular bookseller. Paul grows up the younger of two sons in a lower-income broken home; his mother left his father, perhaps because of his father's haplessness, and Paul's older brother Henry does what he can to help Paul weather the difficult times. Mostly Henry teaches Paul to box, and to shoot pool, but though Paul never becomes more than ok at those two activities, he's still pretty attached to his older brother.

Henry gets married, buys a garage, and looks to be making good; Paul works in a used bookstore, has a girlfriend Judith he becomes obsessive about, and starts following her on a downward path toward heroin addiction. Eventually Paul leaves Toronto for Kingston, Ontario to clear himself of Judith's baleful influence. When he returns, Henry's situation has deteriorated and Judith has straightened herself up; there's a complicated, but well-plotted, denouement. 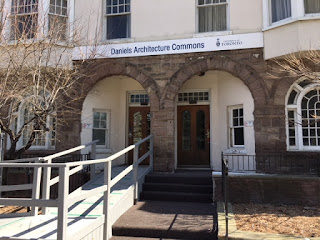 It was interesting seeing a novel set almost entirely in my current neighborhood. Paul mentions several times that he lives near the Wing On Funeral Home. When I first moved to Toronto twenty years ago, the Wing On Funeral Home was still operational; since then the building has been taken over by the University of Toronto's main campus for the 'Architecture Commons.' Whatever that is.

Paul Silvers' friend Leonard works the press at a small publisher. There used to be two small publishers in this neighborhood, The House of Anansi and Couch House Books; one or the other or both were no doubt models for the fictional press mentioned in the novel. Couch House Books is still there. It's just four or five blocks from where I live; I don't think I'd ever walked by until today because it faces on to an alley (a laneway in Canadian-speak) and I'd just never had reason to go down that alley. But Paul ends up there in the middle of the night at one point to get Leonard's help.

It's a classic Toronto coach house that no doubt once held a carriage and horses. You can't tell from my picture, but now it's full of books in the window, and you can see an old-fashioned press in the 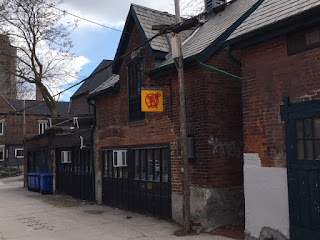 background if you peer in.

It's interesting seeing a novel set where you live. I've read other Toronto fiction, Margaret Atwood's The Robber Bride for example, but nothing has been quite as local as this was for me. I grew up in Chicago, and I think of that as more a town where novels occur, but still the Chicago novels I read were mostly set elsewhere in the city: James T. Farrell's masterpiece Studs Lonigan takes place on the south side; Nelson Algren's Frankie Machine (The Man With The Golden Arm) lives on the northwest side; the climactic murder of Richard Wright's Native Son takes place in Hyde Park. (I did live in Hyde Park for about six months at one point, but still that's not my part of Chicago.) I always thought of Hurstwood in Theodore Dreiser's Sister Carrie as working at Berghoff's downtown, a restaurant my family would go to, but that may have been wishful thinking. It wasn't until I saw David Mamet's American Buffalo on stage that I thought, this is my town, this is the Chicago I know, the north side near the lake, but not the expensive high-rises right on the lake. (It's a great play. Before David Mamet became so crotchety.)

As for The Bookseller it was pretty good, I thought, but maybe not perfect. It started very well, and really, it ended well, too. Cohen's handling of time left me a little confused, but maybe I wasn't reading it as closely as I could have. The outer frame of the novel takes place in the early 90s, I guess, around when it was written. (It came out in 1993.) At that point Paul Silvers is married to Judith and they've settled down. But it flashes back to a couple of different times in his troubled 20s and also to his teenage years. It wasn't always clear to me where we were.

That may have been my fault. The bigger problem was Constable Detective Nicko Ross, a corrupt, but still self-righteous cop, who stands at the center of the plot. He just wasn't very convincing. He walked in out of some genre novel, or maybe more likely a movie, say L.A. Confidential or Training Day. And if he'd been played by Kevin Spacey or Denzel Washington, it could have seemed more convincing, but as it was, I don't think Cohen pulled it off. Worse, Ross was at the center of things; he had to be convincing for this to be an entire success. Oh, well. "The novel is a prose narrative of some length that has something wrong with it." So says Randall Jarrell.

For a more professional photographer's view of my neighborhood, see the movie Scott Pilgrim vs. The World. (Which is quite enjoyable in its own right. Wasn't everybody just a little in love with Michael Cera?) That movie is almost entirely filmed within a mile of where I live; one day I was walking home and the street was filled with artificial snow in front of the local Pizza Pizza (which I definitely don't recommend.) Though I didn't realize it at the time, they were filming Scott Pilgrim.

I'd read another Matt Cohen; in fact, a local Little Library box had his The Spanish Doctor with a blurb by Alberto Manguel on the cover, so I have one at hand. Maybe even soon. 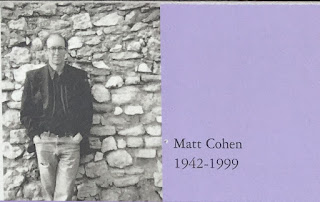