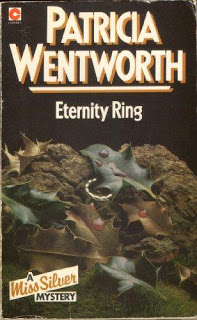 Eternity Ring is a Miss Silver mystery by Patricia Wentworth that came out in 1950. That's about the middle of the Miss Silver series and the characters are well-established. Wentworth is a pro and it shows.

A while back I saw a blog post--I forget where now--in which the author had read a couple of Miss Silver mysteries with indifferent results, and wondered if she/he had been reading the right ones. I thought I should have an answer to the question since I've read a bunch, but didn't. When I started this one, I thought this is the one. This is where to start. But then I decided maybe not. Still it's pretty good.

For those not in the know, Miss Silver is a former governess who has become a professional detective, though a good number of her cases come through personal acquaintance, rather than professional engagement. She has a friend in Scotland Yard--convenient for any English detective--hers is named Frank Abbott and it's he who brings her into this case. Abbott admires Miss Silver and her quiet way of detecting; his boss, Chief Inspector Lamb, is less certain, and a bit of an old stick about women in professional roles, and tends to bluster, but even he has to admit Miss Silver gets results.

The characters are the strongest aspect of this novel. Abbott, Lamb, Miss Silver herself are all handled well and amusingly. Wentworth is a good hand at sketching characters and the various suspects and victims are also well-drawn in this one.

The plot, though, was less successful. A French woman had all her wealth (in diamonds) stolen by an English soldier during the fall of France in 1940; after the war she comes to England to find the culprit. She succeeds, only to become the first victim. A second woman saw something, deduces who the murderer must have been, and she's also killed for her pains. So far, so good. But...

...the main problem is this: there are three possible suspects. But one of them is the romantic lead, and Patricia Wentworth is not the writer to have her romantic lead also be the killer. A second suspect is a chauffeur, and we all know that Golden Age detective novels can't have a servant as the killer. In any case he's too louche to be the killer; it would simply be too satisfying if he did it. So from quite early on, it's obvious who the actual murderer was.

Also Wentworth violates Chekhov's rule about the gun: a gun over the fireplace in the first act must be fired in the third. The novel starts with a woman who listens in on the party line phone, but she never learns anything during the course of the novel. The whole way through I expected her to be the second or the third victim, and when I got to the end and she wasn't, I felt cheated.

Needless to say, Miss Silver solves it, with a touch of suspense at the end. It was fun, but I'm still deciding which Miss Silver novel I would recommend as a place to start.

Vintage Mystery Challenge. Gold. Where. Set in a small village. Half the mysteries I read could probably qualify for that category, but might as well use it!