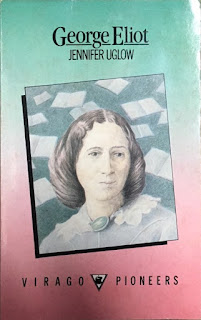 George Eliot (1987) is the first of Jennifer Uglow's books, and also the first of hers I've read, but she's gone on to a notable career as a biographer of English figures. I got as far as the chapter on the writing of Romola before I started that book, and once I'd finished Romola, I read the rest of Uglow's biography.

Uglow came to this interested in defining the nature of George Eliot's feminism and it's here she's most interesting. As long as there has been feminism, there have been arguments about what that means: are women different from men, and do those differences need to be equally valued? Or are women, at least in their social and legal roles, to be treated the same as men? Of course, those poles aren't exactly in opposition, but they're often treated as such.

Uglow wants to argue Eliot is a difference feminist. (She doesn't use the term, which may not even have existed in 1987.) While at first I resisted her argument, she does make a pretty strong case, though in the end I do think she underestimates how much Eliot is emphasizing the limited options available to women, especially in a character like Gwendolen Harleth. But according to Uglow, Eliot's ideal woman has a more emotional, nourishing role than a man would have. (At the same time, Eliot sees herself as particularly a masculine figure.) I don't know that I entirely agree, but as I say she does present a good argument. Dinah Morris, Romola, even Dorothea Brooke could be examples.

She does quote a passage I copied out as well, and found to be the crux in Romola, where Romola decides to change her fate:

I was going to build an argument around that for my review of Romola, but ended up going in a different direction. But you have to like somebody who sees the same things you do, right?

I wrote most of this before dinner, then went to cook, and finished up after dinner which included a half bottle of Chardonnay. That's my defense... Swiss chard and leek quiche, with a salad. The Other Reader grows 'em, and I cooks 'em. 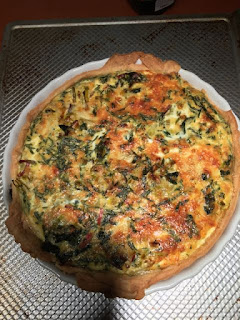