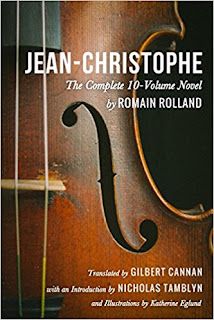 In our last episode, Jean-Christophe was a teenager who had become the head of the family after the death of his father and grandfather, financially responsible for his mother and younger brothers. He's playing in the town orchestra and teaching piano, but what he really wants to do is compose. He's lonely and awkward in the way of a bright teenage boy.

That post covered the first three novels of the ten-novel series; this will take on the next four. The novels are fairly short, so those seven novels are about 1100 pages in my edition. Five hundred to go!

His awkwardness only increases in volumes 4 (Revolt) and 5 (The Market-place). Jean-Christophe gets involved in public debates about the relative virtues of the music of Brahms and Wagner. He manages to offend parties on both sides. As a young composer aiming to make his way, he's dismissive of the music of his fellow young composers; we're not really left in doubt about his correctness in this, but we're in a lot of doubt about his policy and even his manners. And he offends the prince of this principality, and so loses his job with the town orchestra. He manages to totally destroy his position in polite society. The narrator is sympathetic to his viewpoints, but not very sympathetic to his demeanor, and so are we. Young Jean-Christophe is a little hard to take in these two volumes. Even when an older musician likes his compositions, Jean-Christophe in his diffidence and irritability manages to make the occasion impossible.

There are two events that take place at the end of Revolt with significance for the rest of the series. First Jean-Christophe has tickets for a box at the opera, but has offended and is offended by everyone in town, so he'll have to go by himself. But he meets a young French governess who is used to better things and misses culture. Jean-Christophe offers her a ticket, and though she knows she shouldn't, she takes it and goes. Well, that a governess is seen alone in a box at the opera with a man is shocking enough, but that that man is Jean-Christophe! She is fired immediately. Jean-Christophe is at first unaware of what's happened, but when he discovers it, he immediately feels terrible, but there's nothing he can do: she's already on a train to France.

Jean-Christophe is now even more upset with the censorious Puritanism of his town; when he goes to a country dance, and the soldiers from the local barracks arrive, and start abusing the peasant girls, and Jean-Christophe comes to their defense. A riot ensues, and one of the soldiers is seriously wounded. Jean-Christophe has to flee arrest and is himself on a train to Paris by morning.

The Market-place is set in Paris, where the impoverished Jean-Christophe tries to establish himself. His abrasiveness makes it difficult to find and keep pupils; he has no friends who might form the basis of a claque the one time he has a composition performed, and it's booed; he can't even be nice to the person who keeps him alive by assigning him music-copying jobs.

Rolland uses this novel--and Jean-Christophe's ignorance--to conduct a survey of French culture around the year 1900. Well, I'm ignorant, too, and I'm afraid a lot of this went right past me. My edition has no notes. Music is naturally the most important: Berlioz, Debussy, and Satie, for instance. But there are also authors such as Anatole France and Maurice Barrès, as well as the Dreyfus affair. And that's the stuff I recognized.

In the earlier post I thought the narrative quite linear, but that changes. In retrospect, I suspect it was deliberate on the part of Rolland to match the simpler childhood time of our protagonist. Revolt has clear foreshadowing in the character of the young governess, and The Market-place has sections almost essayistic. At the end of The Market-place, Jean-Christophe becomes great friends with a young and still struggling French writer Olivier. Shades of Otto from the earlier books. The sixth novel Antoinette flashes back and tells the history of Olivier and that governess, who are brother and sister.

And in the last of the books (The House) I've read so far, Jean-Christophe and Olivier take top-floor rooms in a large house. With Olivier pushing for him in the public sphere, Jean-Christophe is beginning to have some success. But this novel also follows the stories of all the inhabitants in the house as well, their interactions with each other, and the influence of Jean-Christophe on their lives. Rolland sees Jean-Christophe as a great-souled figure; I want to say Nietzschean, but that word is so loaded it's dangerous, but let's say, Nietzschean in a good sense. But our hero is still just as disdainful of society now that it's beginning to celebrate him as he was when he was a nobody. Will he still manage to shoot himself in the foot? Quite possibly!

Stefan Zweig wrote a biography of Rolland that came out in 1921. I've got a PDF of the English translation still to look at. And apparently Rolland features in Zweig's The World of Yesterday, which has been on my hold list forever (I'm slowly moving up) because I've been interested in reading it for another reason. I may just have to buy a copy.

The reading chair. It's easier to make progress in an Internet-free zone: 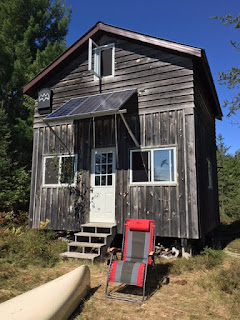