Neil Postman's Amusing Ourselves To Death 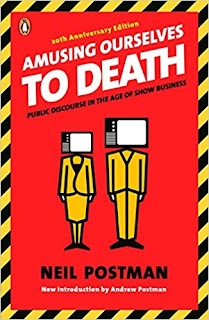 Amusing Ourselves To Death (1985) is one of those books that's been around for years, that you (I) think you know, and think you don't need to read. I was wrong when I thought I knew what was in the book. Alas, I was right I didn't need to read it.

It's an attack on the shallowness of public discourse in the United States, particularly with regard to television. I should have been the target audience for this; my reason why I didn't need to read it  was because it would just reinforce what I already knew. I like to read long books and don't watch much television; I only signed up for Twitter a month ago, and limit myself to looking at it once a day; I figured this would be preaching to the choir. Well, no.

And its unneeded-ness is not just because television's moment has kind of already passed: television has had its forty years to destroy society; it's either done its job or it's failed; we're on to the Internet now.

There are real issues here: Twitter and Facebook have not improved the substance of public discourse, and we weren't at a high point before that. But Postman argues the telegraph and the photograph were already a bridge too far.

Now I don't know whether Postman was an idiot or just playing one in a book, but as an example, he quotes Thoreau, "We are in a great haste to construct a magnetic telegraph from Maine to Texas; but Maine and Texas, it may be, have nothing important to communicate..." Now Postman treats that as if the two local communities have no issues in common, but that's not the reason Thoreau mentions Maine and Texas in particular; the two locales differ on the great issue at the time Walden takes place and is still the great issue when Walden is published: slavery and the expansion of slavery.

On photography, he writes:


"And just as 'nature' and 'the sea' cannot be photographed, such larger abstractions as truth, honor, love, falsehood cannot be talked about in the lexicon of pictures."

He relies a lot on Susan Sontag's book On Photography, an interesting, but problematic book, but even Sontag would not be as flat-earth-y as that about photography.

But photography isn't the only art he seems to have no conception of:


"That is why a good reader does not cheer an apt sentence or pause to applaud even an inspired paragraph. Analytic thought is too busy for that, and too detached."

I would be horrified to meet such a 'good' reader, and horrified to be thought one. But Postman assumes that we all read books as if we were John Stuart Mill on one of his more serious days. But Dickens, in Nicholas Nickleby, has an argument about the merits of northern boarding schools. It is not an analytic argument, though no less effective for that. Even John Stuart Mill didn't think that all books proceed analytically, only that by the conflict of ideas in the public sphere, some truth comes out.

If there's a thesis in the book, it's this:

I might even agree with that around the margins, though I'd make the margins pretty narrow. Postman's margins are such that there are no letters left on the page. The shape of our knowledge of anything is determined by the medium through which we learn it. Postman is that proverbial man who has discovered a hammer and now everything looks like a nail. But really his argument is not analytic at all; it intends to catch attention by being shocking. Sesame Street is more dangerous than Cheers, etc., etc. Well, there are plenty of shock jocks in the world these days. Maybe Postman isn't so different.

I picked up the 20th anniversary edition at a remainder bookstore at the end of last year, thinking with, well, you know, everything, it might be interesting to read now. Just the other day I saw it cited by Dubravka Ugresic (post coming soon!) and somewhere else a mention of his preference of Huxley to Orwell as a prophet of now. Aha! I thought. That's what I've always said. But even this he gets wrong: Postman shallowly remembers nothing but the feelies from Brave New World. John doesn't want to read J. S. Mill, he wants to read Shakespeare. He doesn't want the right to be scholarly and analytic--he has that--he wants the right to be sad.