Christopher Hibbert's The House of Medici: Its Rise and Fall (#NonficNov) 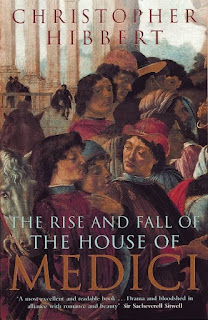 I thought I'd read up on the history of the Medici and Florence after reading George Eliot's Romola a couple months ago; I put in a hold request at the library; it arrived only recently. It could have been a fiction/nonfiction pairing; that was my idea even before the pairing idea showed up as a theme for #NonficNov, but in fact it wasn't as strong an entry as I had hoped.

That's not the fault of the book, which was good.

But Romola mostly takes place during the years when the Dominican priest Savonarola was guiding the restored Florentine republic, and the Medici were in exile. It's glossed over pretty quickly in Hibbert.

I find the history of Italy pre-unification hard: too many city states, too many aristocratic families vying for power in those city states, and then when some aristocrat becomes pope, there's a new name, but it matters very much that Julius II, for example, was of the della Rovere family.

Hibbert, not an academic, but a professional popular historian with a deep interest in Italy, tells his story well and readably. I'll probably have forgotten most of the details six months from now, but that says more about me than the book. After a brief bit of prehistory, it runs from the birth of the first famous Medici, Cosimo, in 1389 to the death of the last, Anna Maria, in 1743. The greatest emphasis on the years of Cosimo, Lorenzo the Magnificent and the first Medici pope, Leo X.

One thing I can tell you I will remember is that a surprising number of the Medicis were fat. All that rich living, I guess.

I'd recommend the book if you're interested in the topic, and especially if you're traveling to Florence; it's very strong on associating the sites where the events occurred with what's actually on the ground in Florence today.
Posted by reese at 4:14 PM