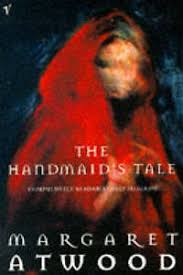 Well, I don't think I need to say what the world of The Handmaid's Tale looks like. Is there a more famous literary novel by a living author at the moment? Harry Potter is probably still better known than Offred, but not many other characters.

I came to this fresh, or as fresh as is possible these days. This is my first read of the book. I haven't seen the television show or the movie. Or the opera for that matter. (There is one, it seems.) But twenty years ago or so, I did see a play at Toronto's Fringe Festival, and I thought, hey, that's The Handmaid's Tale, even though they weren't advertising as it as such, or even as an adaptation. I wondered if they'd gotten the proper rights. (Well, it was the Fringe Festival, so probably not.)

And the play was closely related to The Handmaid's Tale. I can say that now for sure. But I can't tell you why I knew what was the world of the novel even back then, but I did and I was right.

You don't have to have read Doyle, or seen a movie or a television show, or even a mouse in a deerstalker, to know who Sherlock Holmes is. The Handmaid's Tale is getting up to that level of mythic presence.

That all may explain a bit why, though it's been on the shelves here for a while, I haven't read it, but that was a mistake. I felt I knew the book, but there's still a lot there even if you know about the dystopia.

It's also a well (and interestingly) told story. The prose is impressive. The way information is doled out is very well-handled. There's tension and suspense; this world is terrifying, and bad possibilities could occur with any action. But still Offred has to act, and try, as best she can, to live.

And the politics are a little subtler than I suspected. In the end, though some people benefit, nobody really likes this world they've constructed. Not the Commanders, not the Wives, not the Handmaids, not the Marthas, not the Jezebels or the Econowives. But some of them meant well to begin with. The road to Hell really is paved with good intentions.

Anyway, you probably don't need me to tell you, but read it. Do.
Posted by reese at 2:01 PM