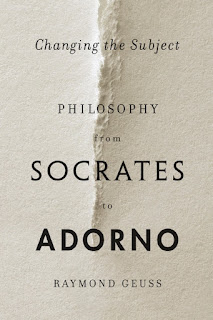 I'd like to be a better reader of philosophy than I am, but it's a hard subject. One of the ways I think I might improve is by reading histories of the subject, and the very title of Raymond Geuss' new book Changing the Subject: Philosophy from Socrates to Adorno suggested it might fit the bill.

The review I read of the book did mention that the volume was idiosyncratic in its approach and would better reflect Raymond Geuss than all of philosophy and that's true. So I'm still looking for that good history of philosophy to ground my readings. (Suggestions in the comments greatly appreciated!)

But I thought this was very good. Geuss writes in the introduction to his book:


...its ideal reader would be the intelligent person with no special training in academic philosophy who thinks that philosophers have sometimes raised some interesting questions and who wishes to try to get clear about whether this is the case and what some of these questions might have been, in the interest  of thinking about them further.

I thought, hey that's me! And he really does write successfully for such a person.

The philosophers he discusses are Socrates, Plato, Lucretius, Augustine, Montaigne, Hobbes, Hegel, Nietzsche, Lukács, Heidegger, Wittgenstein, and Adorno. He generally picks one work from each author and addresses the question that work covers. He's good at it. While there may be more to Heidegger than is covered in fifteen pages, that he can say anything about about Being and Time and have it sound correct and make sense impressed the heck out of me. And he's equally good on most of the authors.

The works Geuss chooses revolve around a theme, which I would describe as, the question of how to live as an individual in society. He's an emeritus professor at Cambridge; I've read nothing else by him, but that's a big enough theme to have occupied an entire career, and may have done so for him.

And he can be funny! in a philosophical kind of way...


Socratic irony and the Socratic mode of questioning were monumentally inventive ways of being irritating.

Recommended.
Posted by reese at 12:05 PM