Rollo May's The Courage To Create

"This brings us to the most important courage of all. Whereas moral courage is the righting of wrongs, creative courage, in contrast, is the discovering of new forms, new symbols, new patterns on which a new society can be built." 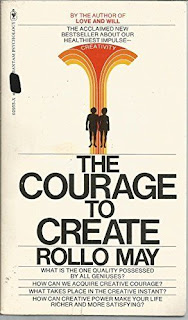 Rollo May is one of a group of psychologists and psychotherapists writing in the post-WWII period who are usually called humanist or existentialist. Mostly they worked in the U.S. Victor Frankl, Erich Fromm, Irving Yalom, Abraham Maslow.

May in this book (1975) says the usual psychotherapeutic observations on creativity are inadequate and often plain wrong. He's particularly hard on the "compensatory theory of creativity," that we create art to compensate for our inadequacies.

Instead he wants to inaugurate a new approach to the subject; he emphasizes the challenge of the process, the (at least occasional) joy in the result, and what's involved in getting there, particularly the alternation of productive and fallow periods.


"It is necessary that the artist have this sense of timing, that he or she respect these periods of receptivity as part of the mystery of creativity and creation."

May himself was an amateur painter, and many of his examples are drawn from painting and sculpture, Picasso, Mondrian and Giacometti; but others are from literature: Joyce, Auden, Yeats, Dylan Thomas, Beckett, Camus and Stanley Kunitz are all cited. I found it fascinating, and a much more positive view of creativity than is usual in psychology. Maybe Maslow is as good, but he's less specific to the work of artists.

It is a book of its era, however, and not just that crazy 1970s cover on my edition. The Maharishi, TM, Gestalt all get their nod in one section. He talks about rebels, as not just someone who "takes over the dean's office."

He's also operating in the Freudian tradition. His main influences seem to be Adler and Rank; he also cites Jung. He is a bit subject to the casual misogyny in that tradition, or maybe it's still the era, though by 1975 he could have been a bit more woke. He casually cites a study of "artists and their wives;" there are a few other examples. Though to his credit he does use "he or she" on occasion, as above.

It's based on various lectures he gave; it more peters out than ends.

But with all that said, I still think the core of the book is fascinating and helpful on the subject and I've read it now a couple of times. I picked it up again after reading Deb Nance's list of books on writing here. (I tried to comment on her website, but my comment went AWOL...) I'd recommend it.

And now I learn from Wikipedia his middle name is Reese! I approve!