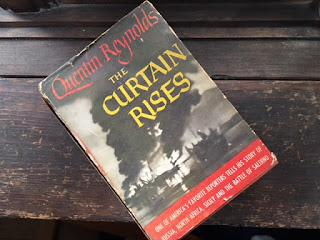 The Curtain Rises is a collection of the war dispatches Quentin Reynolds filed for Collier's Weekly in 1943. He goes to Moscow via North Africa and Iran and is in Moscow from April through June of that year. Then he heads back to North Africa again transiting through Iran; by the end of July he's in Palermo, on Sicily, now controlled by the allied armies. He's on General Mark Clark's command ship for the invasion of the Italian mainland in September; it's here he gets closest to the fighting of any of his stops along the way. With the allied armies on the Italian mainland, Collier's calls him back to the U.S. and by the end of the year he's home in New York.

It's an interesting book. Reynolds is not an analyst and doesn't pretend to be one; he's more a high-class merchant of gossip. His best stories, I thought, are the ones taking place just behind the lines: he meets (and drinks with) Ernie Pyle, John Steinbeck, FDR, Jr., Bob Hope along the way. He drinks lemonade with Monty--Field Marshall Bernard Montgomery--who was a teetotaller. Who knew? One of the best pieces describes Easter of 1943 in Moscow; the Soviet Union has captured the German 6th Army at Stalingrad not that long before. 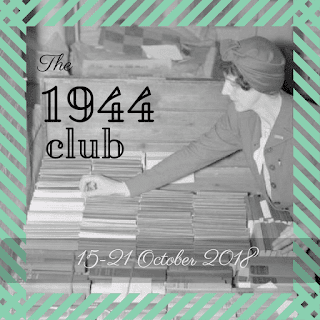 I pulled this off the shelf for the 1944 Club, and started it at the end of that week, but didn't finish it in time. But it's a fascinating look at the period and it's interesting to see what they didn't see. It also makes a great pairing with John Hersey's A Bell For Adano, because one of the better pieces is about the allied military government in Sicily.

But he doesn't see, and part of the reason I slowed down in reading it once I'd missed finishing it for the 1944 club was precisely his political blindness. Reynolds seems to have been left-wing, but not Communist; Wikipedia tells me he got into a legal squabble after the war with the conservative columnist Westbrook Pegler, a fight which Reynolds seems to have won. Maybe he felt he needed to say nice things about Stalin so long as Stalin was our ally. But one of the pieces is about the recently (in 1943) discovered Katyn Forest massacre, and Reynolds is so miserably wrong-headed about it, I couldn't bear the book for a while. In 1943, he couldn't know that the Polish officers had been murdered by the Soviets; he couldn't know about the secret codicil to the Molotov-Ribbentrop pact; he couldn't know about the funk that Stalin fell into after the surprise of Operation Barbarossa. But he could have known there were things he didn't know, and he didn't.

Anyway, interesting enough for its view of the time, and for its gossipy look at war as a boy's own adventure.
Posted by reese at 2:46 PM