Nicholas Blake's The Corpse In The Snowman 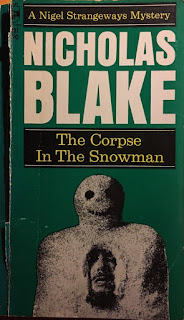 A cheesy cover for a cheesy mystery.

The Corpse in the Snowman (1941) takes place at a country house during the winter of the phoney war. There are a few references to blackouts and gas rationing, but the war hasn't really impacted anything, including the plot of the mystery, which feels like the thirties or even the twenties.

Now Nicholas Blake is the pen name for Cecil Day-Lewis, who went on to become the Poet Laureate of the UK, so it is to be presumed he can write. He was a friend of Auden at Oxford, and maybe had some connection with sophisticated bohemian circles. But he knows nothing about drugs, and that's a problem.

Because his plot is structured around assumptions he must have garnered from repeated viewings of Reefer Madness and titillating articles in the yellow press. The first victim, Elizabeth, has had her life ruined after she was offered a marihuana (sic) cigarette in high school and was thereby turned into a sex maniac. And now it's about to happen to the next generation of children, her niece and nephew. Oh, noetry!

She (and the suspects) are gathered at her older brother's country estate. Did he murder her because of the scandal? Or his wife, because her inheritance would revert to her older brother? Did her younger brother do the deed because he was obsessed with her fall? Or is her demonic drug dealer to be found among the houseguests? Oh, dear. I have the feeling I gave something away.

It's not quite as obvious as that, but still Day-Lewis is not as clever as he thinks he's being, and regular mystery readers will foresee the last reversals without too much trouble.

And Nigel Strangeways, the genius detective, is just not that interesting here. I first became interested in the series because Strangeways was supposed to be based on W. H. Auden. This is the fourth I've read (out of fourteen). The connection between Auden and Strangeways grew less after the first novel and it's hard to see at all in this one, the seventh. Instead Strangeways is just another eccentric, but without any particularly interesting eccentricities and little skill at dialog.

Other mysteries in the series have been better, I thought. This one was a weak entry.

But it is definitely a December sort of read. And it's the last category I need for the My Reader's Block Vintage Mystery Gold challenge:

Gold. When. During a weather event. There's a convenient snowstorm which both isolates the country house so that we know no outsider could have committed the murder, and provides an oversized snowman as a convenient place to hide a dead body... 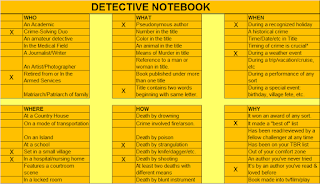