Graham Greene's Doctor Fischer of Geneva or The Bomb Party 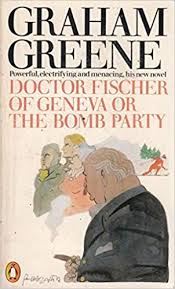 Well, nobody would call this Graham Greene's greatest novel, I imagine, or even particularly recommend it as a place to start. But I'm running out of Greene novels I haven't read and this one finally floated to the top of the stack.

But Greene can certainly be great and I liked this one. Doctor Fischer is a toothpaste gazillionaire and a powerful man in Geneva. He's widowed and has a daughter that he's mostly estranged from. He also has a circle of Toads, that is toadies who put up with his cruel practical jokes in exchange for his (valuable) gifts. It sounds a bit like it might be The Magic Christian, but it's much darker (and less funny) than that.

The narrator is Alfred Jones, also a widower, who lost his hand in the London Blitz, and now ekes out a small living from his disability pension and work as a commercial translator. Jones and the daughter Anne-Luise fall in love and marry.

The novel is told in retrospect by Jones and we know that something bad has happened; he refers to both Fischer and Anne-Luise in the past tense. It's not particularly a mystery, but I also don't feel I should spoil it; there's a carefully constructed atmosphere of dread and discovering the nature of the dread provides the drive of the story. Doctor Fischer is a monster, but why and how, and is he justified? Well, those are the questions of the novel.

I think of Greene as a writer concerned with faith and religion and that colored my impression of Doctor Fischer: an all-powerful man with a circle of figures dependent on his every whim. Is that a possible interpretation of the novel? Hmm. Maybe.

Now having read a bunch of Greene novels, I think I'd like to read his biography. Does anybody have a sense of good one? Any particular favorite books by or about Greene?

That completes my list for the My Reader's Block Mount TBR challenge. Probably get one more book in this year, and then I'll need to write a wrapup post.