"Now, the true charm of pedestrianism does not lie in the walking, or in the scenery, but in the talking. The walking is good to time the movement of the tongue by, and to keep the blood and the brain stirred up and active; the scenery and the woodsy smells are good to bear in upon a man an unconscious and unobtrusive charm and solace to eye and soul and sense; but the supreme pleasure comes from the talk. It is no matter whether one talks wisdom or nonsense, the case is the same..." 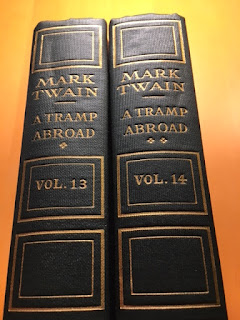 And I'll bet that's doubly true--whether wisdom or nonsense--if you're walking around with Mark Twain.

A Tramp Abroad (1880) is Twain's travelogue of a walking trip along the German side of the Rhine, through the Swiss Alps, and down to northern Italy, Turin and Milan. He walks with his 'agent,' Mr. Harris, loosely based on the Congregationalist minister Joseph Twichell.

Except it's a ongoing joke in the book how little walking they do. They're going to walk up the Neckar valley to see a castle, but then take the train; they're going to walk up to their hotel in Switzerland, a pleasant three hour stroll, except it takes them two days and still they cadge a ride for part of it; finally they get to the top of Mont Blanc--by telescope.

There is a lot of wonderfully jokey travelogue, but that's not Twain's only mode. Twain shows a sociologist's interest in the custom of student duelling at Heidelberg, goes to watch matches and interviews participants; he's also seriously interested in Alpine ascents, even if he only makes his own by telescope. He quotes from various accounts, including Whymple's first summiting of the Matterhorn only fifteen years earlier.

There are also embedded tales, both contemporary and retellings of fairytales, such as you might expect from the author of 'The Celebrated Jumping Frog of Calaveras County.'


Nothing gives such weight and dignity to a blog post as an Appendix.

The most famous part of the book is Appendix D, "The Awful German Language," which is just hilarious. It's the only part of the book I'd read before. I first read it in high school, when I hadn't had any German, but was taking Latin, so jokes about the Dative case worked for me. My German teacher had us read it when I took German and Twain's sixth rule for reform--that we drop 'those useless "haben sind gewesen gehabt haben geworden seins"' from the ends of sentences--now suddenly made sense. And now I've seen him as he actually tried to use that German in the field. The more German you know the funnier this essay gets.

The Art of Mark Twain

Or really, the drawing of Mark Twain, because The Art of Mark Twain was probably already written by some professor at Columbia in 1935 ("We see from Twain's treatment of the oppressed chambermaid on p. 109-110 of volume 13 of the so-called National edition, his incipient critique of the late-stage capitalist economy...") and is hardly going to appear in my blog post. But consider:

Did James Thurber study this book or what?

Yet another entry for the: