"Immigration officer holding my passport behind his accounter, my heart hanging on high sky. Finally he stamping on my visa. My heart touching down like air plane. Ah. Wo. Ho. Ha. Picking up my luggage, now I a legal foreigner."

Guo's A Concise Chinese-English Dictionary for Lovers came out in 2007 and was shortlisted for what that year was called the Orange Broadband Prize for Women's Fiction. The narrator, Zhuang or 'Z' after she decides to make it easier on Westerners, is the only child, a daughter, of a couple who has just made the leap from peasant to small factory owners. She comes to London for a year to learn English.

Zhuang's story is a girl meets boy, girl falls in love with boy, something happens (Spoilers!) kind of story. Let me assure you that one of the outcomes you have already thought of is what happens.

It's also the story of a naive girl from the provinces who learns by traveling.

Those are good story types, but it's the language that makes this interesting. Most of the book is in Zhuang's voice, given above. The growth of her ability in English is nicely graded over the year she spends in Europe, but as you might expect she's not yet fluent at the end of her year-long course. Not to go all Russian Formalist on you, but Guo makes good use of her narrator's language and naiveté to defamiliarize us from things we are used to seeing and make us see them anew. She is also able, at least for me, to get both humor and poetry out of that brokenness.

Still, it's very nearly an entire novel of that kind of pidgin English. Would you read it? It was just as well it wasn't any longer than it was, and even at just 280 pages with lots of white space, I was occasionally annoyed. But mostly amused and impressed.

I no longer recall what got me to pick it up in the bookstore; maybe I saw it mentioned in some article on the Orange Prize. It's just as likely it was the title; I'm a bit of a sucker for a pomo-ish structure. Dictionary of the Khazars, anyone?

One down! And not (quite) the shortest. Roof Beam Reader TBR challenge. 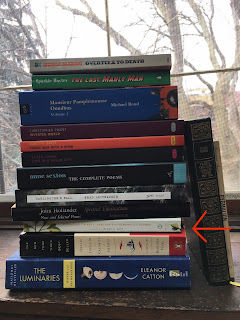