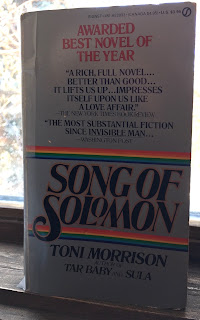 Suicide note? Delusions of a madman? Or echo of a true story passed down in a song? Robert Smith, the author of that note, hangs off the cupola of Mercy Hospital with wings attached to his arms, and in the crowd a woman sings, "O Sugarman done fly away/Sugarman done gone."

Smith doesn't fly, but imbalances, and failing to grab on, falls to a splatty death. The town's firemen are still only donning their greatcoats. The singing woman tells another woman in the crown, visibly pregnant, that her child will be born the next day, and it turns out true. That child is Macon Dead, the third of that name, nicknamed Milkman, and he's the main character of the novel.

Wikipedia tells me that the 18th of February, 1931, is also the day that Toni Morrison herself was born.

The novel covers maybe the first thirty-five years of Milkman's life. Historical events are obliquely referenced--the integration of the military, Malcolm Little becoming Malcolm X, most importantly the 16th Street Church bombing of 1963--but mostly it exists in a familial, almost mythical space. Milkman's conflicts are with his parents, who don't get along, although they continue to live together. They each tell unflattering stories about the other, and as a child, Milkman veers from attachment to one, then the other, as the stories they tell, and he can't really sort, rock his worldview.

His best friend is Guitar, a couple of years older, who is his connection to growing Black Power politics (not ever called such). Milkman and Guitar have squabbles when they're young, as boys would, but mostly Guitar looks out for Milkman in the role of an older brother. Later their relationship becomes more problematic, as Guitar gets more political.

Milkman also gets involved with his cousin (first, once removed) Hagar; at first he's more interested in her than she in him; later that reverses.

Milkman drifts a bit in his 20s and I found that the slowest part of the book; I think he would have matured a bit faster, but maybe not: though he's black, he's upper middle class by black standards, and in his way he lives a pretty protected life.

The end finds Milkman searching first for a hoard of gold, but then for his family history in the South; the symbolism here is almost too heavy-handed, but nevertheless I found it far and away the most affecting part of the novel. The ending is deliberately dark and ambiguous, but not without the possibility of light.

I do think that Morrison uses her own birthday as the start of events is a strong clue; Morrison can hardly be said to have drifted in her 20s--Wikipedia tells me she raised two children and was integral in the increasing exposure of African-American literature--but it is in 1970 (when she's 39) that Morrison's first novel comes out, and only after she begins her own investigation of black history and her own Southern familial roots.

This was my Classics Club Spin #19 book. Which was supposed to be the chunkster spin, but after the mighty random number generator picked the shortest book on my list, I drifted a bit myself and left it to the last minute. But likely the random number generator knew better than I did, because this was a very good choice.
Posted by reese at 2:54 PM