"I shall have a fine book of travels, I feel sure; and will tell you more of the South Seas than any writer has done--except Herman Melville, perhaps, who is a howling cheese."

-R. L. Stevenson, in a letter to Charles Baxter 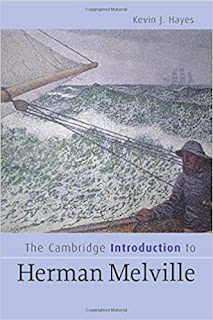 I came across that quote (via Holbrook Jackson's The Anatomy of Bibliomania) and it sent me down a Google rabbit hole in order to decide what the heck Stevenson really thought of Melville. (A howling cheese? If somebody called me a howling cheese, I think my first instinct would be to slug them.) But it seems Stevenson only meant good things about Stevenson by that quote.

At least that's what Kevin Hayes says in The Cambridge Introduction to Herman Melville. ("It means something similar to the proverbial phrase, 'to take the cake.'") Also Stevenson compares the Master of Ballantrae in that novel to Captain Ahab--The Master of Ballantrae comes out in 1889, when Melville's reputation is probably at its lowest, yet Stevenson knows his works well.

Overall I can't say I particularly found the Hayes book helpful, though; on Moby-Dick itself Hayes seemed too taken with the idea of the double or Doppelgänger. Old Ishmael telling the story of course has a relation to young Ishmael living the story, but it doesn't strike me as useful to refer to them as doubles. When Hayes calls Ahab and the whale doubles he has a better, though still not entirely convincing to me, argument. Your mileage may vary.

Still there were a few fun things. One of the contemporary reviews said this of the chapter 'The Whiteness of the Whale':

It 'should be read at midnight, alone, with nothing heard but the sounds of the wind moaning without, and the embers falling into the grate within.'

I'm sure I didn't succeed in doing that, but it sounds good. The next time I read the book. Also 'The Whiteness of the Whale' was Sergei Eisenstein's favorite chapter in the book.

I also learned about Giorgio Federico Ghedini, an Italian composer who died in 1965. His best-known work is the Concerto dell'Albatro, which includes spoken text from Moby-Dick. For classical music fans, here it is from Youtube: (the spoken word part is in the third movement beginning around the 17th minute.)

I previously shared elsewhere in a slightly abbreviated form, this quote from Hayes:


"Moby-Dick demands readers who are unafraid to confront the strange and the unusual, those willing to use their minds, if not their palates, to face the mysteries of existence as reflected through an epic whaling quest."

Aw, shucks. You shouldn't have. You really think so?

And Hayes' final words on Moby-Dick?


"Moby-Dick is the greatest book in the history of the English language."