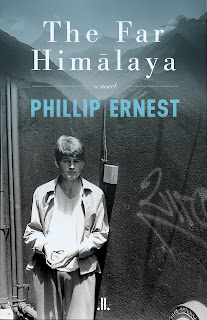 Phillip Ernest's The Far Himālaya came out last year from Linda Leith Éditions. It's the story of Ben Doheny, living on the streets in the late 90s near the downtown campus of the University of Toronto.

The novel starts with scenes where Ben, sleeping on campus, is violently harassed by campus police, then later at the Scott Mission, where he is further harassed by his fellow homeless. (The Scott Mission is an actual shelter near to the main University of Toronto campus.) These scenes are painful and, alas, utterly convincing: the author bio tells us that Phillip Ernest lived on the streets of Toronto himself for thirteen years from the age of fifteen.

But it's not (just) a grim and realistic novel of homelessness. Ben is sustained by his love of the Sanskrit language, which gives both him and the novel a view into a larger world. Part of the reason he's drawn to the campus area is the library and the books. He claims to be a graduate student of Sanskrit when he's not, though later he manages to gain some cover from an emeritus professor in the department. He also becomes romantically entangled with Aditi, who is legitimately earning an advanced degree in Sanskrit. Her adviser, Professor Boylan, is the only active member of the department, and he's an utter monster, an abusive drunk, but he does provide the elements of the plot.

Boylan demands Aditi translate the works of classical Sanskrit which Boylan will then publish under his own name; he's so lost to alcohol and drugs he can't manage sustained work any more. Only under these circumstances will he ever--and even then there's uncertainty--approve her thesis. Ben, with his fellow street-dweller Moksha Das, does the translations for Boylan, thus leaving Aditi the time to work on her own thesis. Aditi also has a dark secret in her past that Boylan knows of, and he can, should he wish to, ruin her academic career at any time.

Will Aditi be allowed to finish her thesis and then move on to a career? Will Ben, homeless and still troubled, be able to keep the love of Aditi? The plot moves along with considerable tension to its final resolution.

It was a fascinating novel, set where I live with landmarks I see every day, and full of a cross-section of life I know nothing about. (And, yes, that also means Sanskrit scholars.) I do feel the ending relied overmuch on a deus ex machina character not previously introduced. And, while I have to imagine being homeless implies bodily functions loom much larger than they might otherwise, a little of that goes a long way for me, and there was more than a little here. Still, a very good read.

The Far Himālaya is Ernest's second novel; his first The Vetala (an Indian vampire novel!) appeared earlier, also from Linda Leith Éditions. I'll definitely read others from both the press and the author.
Posted by reese at 12:38 PM