Virginia Woolf's A Room Of One's Own (#CCSpin) 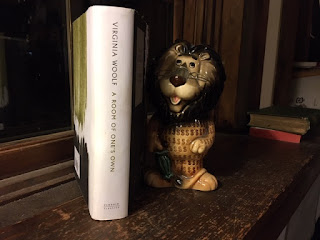 I have to admit to being a bit surprised by A Room Of One's Own. Though I hadn't read it before I sort of thought I knew all about it. (To an ancient Greek, this is called hubris.) What I thought (in advance): In order for a woman (or anyone, really, but women were very much less likely to have it) to become a writer five hundred pounds a year and a room of one's own was needed.

And the essay does make that argument, it's true. But it still surprised me, stylistically I guess. I'm not that well-read in Woolf by any means. But the novels I've read--To The Lighthouse, Mrs. Dalloway, Orlando--are complex, difficult in their language, and deep. Her essays--I've read the Common Reader series--on the other hand, are leaner in their language, full of sparking ideas, and deep. I don't know, I expected this to be like the Common Reader series. But it was neither one nor the other--neither fiction nor essay--exactly.

The initial occasion for the essay was a two-night talk on the subject 'Women and Fiction' Virginia Woolf gave at two women's colleges at Cambridge in October of 1928. She then rewrote the talks as a single essay which was published, in both the U.K. and the U.S. a year later, and is the text in this volume. But she refers several times in the printed essay to the occasion of the talks and starts her essay by saying what her hosts and audience likely mean by 'Women and Fiction' is not what she will address.

What surprised me was the almost fanciful, the fictional, aspect of her essay. The introduction appropriately quotes Woolf herself from The Pargiters, "I prefer, where truth is important, to write fiction." And so she does here. Woolf supposes a sister of William Shakespeare named Judith, equally talented, and how her purported career as a writer would go. (Short answer: not well.) The essay more stops and starts, circles around its argument with its fictional conceit, and demonstrates more by example than by any close-reasoned progression. I'd say it was closer to Orlando, than to anything in the Common Reader volumes. In short, the truth here is important, and she is writing fiction.

My edition (shown above next to Hubert) is the Penguin, and also includes Three Guineas, which I haven't read. It contains a pretty good, though not brilliant, introduction by Michèle Barrett.

Two other things I did notice: Woolf writes at one point, apropos of the British Library catalog: "Why are women, judging from this catalogue, so much more interesting to men than men are to women?" I hate to argue with Virginia Woolf, and I certainly know nothing about the state of the British Library catalog in 1928, but I doubt that's really true. Her basic point, that men want to control women in that time, (we'll ignore for now whether anything's changed or not) I don't doubt: but that's (alas) not the same thing as really wanting to know anything about them. I think she's confusing two different activities here. At some point I might write about men writing about women in fiction, contrasting that with women writing about men. It's a thing I've been thinking about.

The other is that Barrett includes a footnote explaining the name Coleridge: "Coleridge: Samuel Taylor Coleridge (1772-1834), poet and essayist." Really, I thought? A reader of Virginia Woolf will need to be told such basic information about Coleridge? There is no "Shakespeare: William Shakespeare (1564-1616), poet and playwright." But then I decided Barrett was probably right. These days I can imagine this book assigned to incoming college students--possibly high school students--students so young they don't yet even know who Coleridge is. What would Virginia Woolf herself have thought about this turn of events? I have to imagine she would be shocked Coleridge was no longer a household name, and she herself was read first. So: maybe the world has changed.

This was my book for the Classics Club spin #22. I finished the book a couple of weeks ago, but between traveling to California and just generally being slothful, here I am writing this post at the last possible minute...