"'You too will marry a boy that I choose,' said Mrs. Rupa Mehra firmly to her younger daughter." 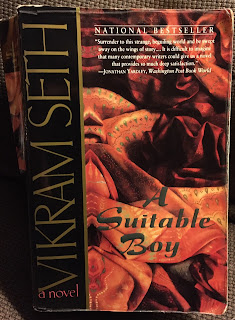 With that many pages there are, of course, a couple of interlocking plots. They're spread out across four interrelated families.

The one that gives the novel its title is Lata Mehra's search--or maybe more her mother's search on Lata's behalf--for a husband. Lata's family is Hindu, of the Khatri (a merchant) caste, middle-class, but after the death of her father, a bit impoverished. Lata herself is a college student majoring in English. There are three main candidates. In order of appearance: Kabir Durrani, a fellow student of Lata's who's a Muslim; Lata's brother-in-law, Amit Chatterji, a well-known poet in English, and a Brahmin of a well-to-do family; and Haresh Khanna, an up-and-coming manager in the shoe industry, of the right caste. This has the fun of a rom-com plot, with various parties scheming for and against, while Lata tries to decide. It ends in a marriage, and probably even the right one. (Though, if you've read it, did you think so?)

Another plot is political: Lata's older sister married Pran Kapoor. Pran's father Mahesh is a member of the Congress party and at the start, the Minister of Revenue for the (imaginary) state of Purva Pradesh. Mahesh Kapoor is the author of an important land reform bill that has only just been passed, but is still under legal challenge when the first national election since Partition and the independence of India is taking place. There are machinations between wings of the Congress party that catch up Minister Kapoor.

The third (the last major, but not entirely the last) subplot involves Maan Kapoor, Minister Kapoor's other son, who is living a dissipated life and has fallen in love with an older (Muslim) singer of ghazals, Saeed Bai. Maan's best friends are the twins Firoz and Imtiaz Khan; Saeed Bai has other connections to the Khans, a Muslim family.

The Mehras, the Kapoors, the Chatterjis, and the Khans. Whew. Got all that?

At fifteen hundred pages with a marriage plot, it's a clear nod to Victorian triple-deckers; and, of the various attempts to recreate a Victorian novel in modern times, I think it's a pretty good one, better than, say, The Bonfire of the Vanities or Palliser's The Quincunx. By setting it in the 50s, in India, Seth has got more opportunities for drama in his marriage plot than a contemporary North American story. (Which might run--"Should we get married?"/"Yes, let's."--and our story is done.)

The space allows Seth to go full Dickens on us, looking at classes from the well-to-do urban sophisticates, like the Chatterjis, to poor, rural peasants, though I did think he was more convincing with the former. Politics are important. For the most part he gives all the good lines to the partisans he likes: secular, liberal. Hindu nationalists, in particular, come across as villains. Well, we knew what Dickens' party line was, too.

It's pretty enjoyable. Is it a masterpiece? Mmm, possibly not.

Seth is pretty good about not telling us what to think most of the way through. That breaks down a bit at the end, though. There are more authorial intrusions like:

'The events involved Maan; and as a result of them the family was never the same again.' [1262]

I don't think this added.

Also Seth's pretty easy on his characters, probably too much so. Some bad things happen: Muslim-Hindu riots, people crushed by crowding at a religious ceremony. But the main characters are snatched from danger by the authorial hand. Now Tolstoy likes his characters; Dickens likes his characters. Still Prince Andrei dies, Anna dies, Little Nell dies, Sydney Carton is actually guillotined. If you're writing a vast social novel larger than a romantic comedy, something bad probably needs to happen to at least one character. In A Suitable Boy, the fairly minor character Rasheed, Maan's Urdu teacher dies, but 1.) he is minor, 2.) the moment of his death is avoided, and 3.) the madness that leads to his suicide didn't really convince.

Still, I don't want to leave you with bad thoughts about the book. It entertains. It's funny, informative, engaging, serious where it needs to be. This is the second time I've read it. The first time was twenty-five years ago when it was fairly new. It's interesting the things I remembered: I had pretty good recall of the rom-com plot, and I remembered the hilarious banter of the Chatterjis, who are always spouting off in couplets. Though the best (😉 ) bit of poetry is this triolet from Mr. Nowrojee, the founder of the Brahmpur Literary Society:

This gives Twain's 'Ode To Stephen Dowling Bots, Dec'd' a run for its money.

Also I wondered, how did we read things like this back in the day? It was 1995 when I first read this, and when I looked back, I see it I read it on an airplane or in a hotel room in Dubai (where I was working.) So I was particularly unable to look anything up. But Seth has really done his homework, though he wears his learning lightly. But it's only now I can plunder Wikipedia and learn about the Khatri caste, co-respondent shoes, A. L. A Schechter Poultry Corp vs United States, or, indeed, that Toru Dutt was an actual poet who died at, well, twenty-one, in fact. (The latter in particular was a surprise. With a name like that, I assumed she was made up.) Did I need to know these things to enjoy the novel the first time? Clearly not. Do you read books with a tablet in reach to look things up? I'm not 100% sure that's actually an advantage but I do now. And it's interesting to discover things.

I reread it because there's a new mini-series version, directed by Mira Nair. It's already been shown on the BBC, and it was the closing night film at this year's Toronto International Film Festival. Well, the film festival was challenging this year. We had thoughts about seeing it, but I hadn't finished rereading the novel and we would have had to stream six hours of video in a twelve-hour window, which is a little too much binging for us. But I do hope to see it soon. It looks like fun: