A Vindication of the Rights of Women

Vindication of the Rights of Women (1792) by Mary Wollstonecraft is a polemical work; it tries to convince. Nowadays if you have a non-zero chance of reading the book, you will already agree with the argument it's trying to make: that women should be given a good education, the equivalent of anything given to men; that both the women themselves and society at large will be better off for women having a good education; and that anyone educated to be silly and manipulative, well, will be silly and manipulative.

"Contending for the rights of women, my main argument is built on this simple premise, that if she be not prepared by education to become the companion of man, she will stop the progress of knowledge, for truth must be common to all, or it will be inefficacious with respect to its influence on general practice."

Maybe in 1792 there were people who might read this book and learn from it. It's not that there aren't people now who could to stand to learn these things--I could name a few--but they won't be reading this book. Alas.

I enjoyed it. It's always flattering to be told things you already believed are in fact true. 😉

Wollstonecraft has a few targets in writing this. There's a couple of Scottish moralists that I had to look up to find out who they were: Dr. John Gregory, James Fordyce. I suspect nobody would read them now except for Mary Wollstonecraft. The big target--and the one she spends most of her firepower on--is Rousseau. Well, Rousseau's idea of female education, given at the end of Émile is pretty awful, and Rousseau is a bit weird about women in general--cf. The Confessions, fascinating though that work may be--or in his relationship with Thérèse Levasseur. Wollstonecraft gets the better of this argument by far.

I learned that the first English translation of Émile is titled Emilius, and it's the version Wollstonecraft quotes. Sophie becomes Sophia.

At several points I thought Jane Austen knows this book well. Wikipedia tells me Austen doesn't ever mention Wollstonecraft, but it seems I'm not the only person to have decided Austen liked the book.

"I do earnestly wish to see the distinction of sex confounded in society, unless where love animates the behaviour."

"Happy is it when people have the cares of life to struggle with; for these struggles prevent their becoming a prey to enervating vices, merely from idleness."

"Strength of body, and that character of countenance, which the French term a physionomie, women do not acquire before thirty, any more than men."

"From the respect paid to property flow, as from a poisoned fountain, most of the evils and vices which render this world such a dreary scene to the contemplative mind."

"I know not what is wanted to render this the happiest as well as the most respectable situation in the world, but a taste for literature, to throw a little variety and interest into social converse, and some superfluous money to give to the needy, and to buy books."

This post has been in draft mode for a very long time now. (It was the last spin book & I finished the book on time.) There's a print copy (a Penguin) somewhere in the house, but I couldn't find it when I was about to start reading the book, so I grabbed a copy from Project Gutenberg. I finished it on the eReader. I started writing this post, but then thought I should read the introduction before posting.

I still haven't found the Penguin so I'm just publishing this post anyway. I'm sorry to report this is the sort of house where books can get lost among their brethren and then are impossible to find... 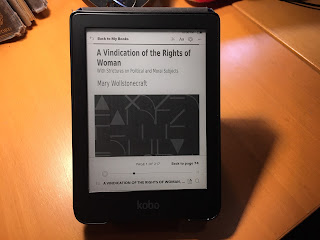