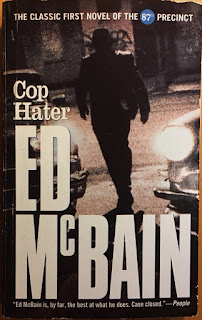 Cop Hater is the first of Ed McBain's 87th Precinct series of police procedurals. Somebody is killing cops: first Detective Mike Reardon is shot outside his house on his way to the precinct; then his partner David Foster is killed. The fact that the two were partners results in the investigation pursuing their previous arrests, particularly any recently out of jail, but when a third detective Hank Bush is killed and he doesn't have any particular connection to the first two, maybe there's just somebody out there who hates cops.

I thought this was nicely setup. We see just enough of Mike Reardon to humanize him before he's killed; Steve Carella and Bush are beat detectives who catch the case; they crack wise with the homicide detectives on the scene before they turn the body over and realize it's their colleague who's been killed. McBain's a pro with a crisp prose style. All that's in the first fourteen pages.

My edition is a reprint with an introduction by McBain from 1989. McBain, under his legal, though not birth name, of Evan Hunter, was already a successful author: he'd written Blackboard Jungle, the basis of the 1955 movie. The introduction is fun. McBain touts himself as the originator of the police procedural. Perhaps that's not perfectly true--John Creasey/J. J. Marric's first Gideon novel came out the year before--but it's close to true in any case, and McBain envisioned from the start a sort of collective hero, with different detectives of the 87th Precinct taking the lead in different cases, in different novels, which is pretty unique. He talks about the research he did to start the series, pestering actual New York City cops before deciding--with delight--he would just make up the city of Isola where the series takes place.

McBain's grittier than the cozies and even most of the PI novels that preceded him; still it's not giving much away to say that the culprit is neither some recent release from the state pen, nor (though Savage the newspaperman promotes this theory) some cop-hating gang member. Those are both red herrings and the solution is more mystery-novel-ish than either of those possibilities. I've read 8 or 10 out of the 55 in the series and I'd say that's generally true of McBain.

But no spoilers. I wish I could say the same of Wikipedia, though. I might have expected (and didn't read until I finished the novel) that the article on the book would include spoilers; I was a little dismayed though that the general article on the 87th Precinct series, which I did look at halfway through, gave away the solution. Grr. Still it was fun, even if I did know--before I was supposed to--whodunnit.

It was also fun to see the series at the start. Cotton Hawes and Meyer Meyer don't feature in this one but Steve Carella does; he goes on to appear in a number of them. We see him courting Teddy and the marriage is planned, but hasn't yet taken place, before the end of the book.

It's the week of #1956Club! Thanks to Simon and Kaggsy for hosting. 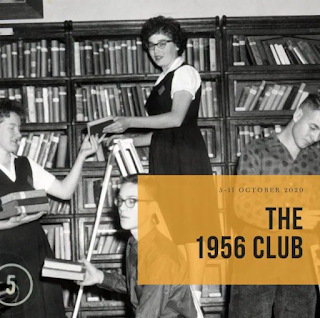