Thinking about the #1956Club

Starting in under a week is 1956 Club, this fall's edition of the club in which we all read books from the given year, hosted by Kaggsy & Simon. Naturally the first thing to do is to heap up a pile o' books... 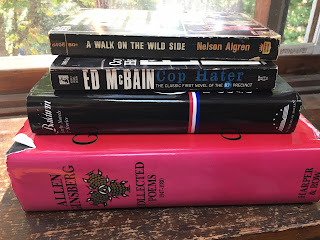 These are the ones I might be likely to read and which I haven't read...

Nelson Algren/A Walk On The Wild Side

Allen Ginsburg/Howl and Other Poems

-it's possible I've read all the poems from Howl, but I'm not sure. But after all, I've been so tormented by seeing the best minds of my generation destroyed by madness, starving, hysterical, naked...I forget about the book.

These books are all pretty short, so there's even a chance I'll read them all. (Well, the 1956 part of the bottom two books is short.) I've also got an unread copy of Henry Miller's The Devil In Paradise around here, which is also short, but I'm less likely to read that.

1956 was a good year for fluffy books which I own and have already read: 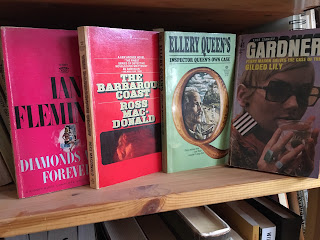 Erle Stanley Gardner's The Case of the Gilded Lily

There's also Patricia Wentworth's The Fingerprint, but she was shy and couldn't be found for the photo op. I haven't read the Poirot of 1956, Dead Man's Folly, but I don't own it and would have to go find a copy. The Barbarous Coast is probably the best of those--Ross Macdonald is so good one hates to quite call him fluffy--but if I reread one, it's likely to be the Ellery Queen, which I read so long ago I don't remember it at all. Rereading a mystery you don't remember, why it's like a fresh new mystery all over again!

I've now been blogging long enough--or 1956 was so good a year--that there are actually two books in my back catalog that I've blogged about before. The better book of these is Angus Wilson's Anglo-Saxon Attitudes, a very good book indeed, I thought. 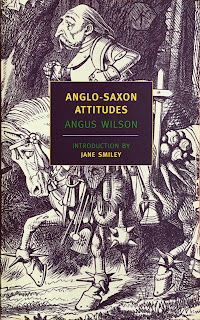 The better post, though, is for Robert Heinlein's Time for the Stars, one of his juveniles, which could have been up there on the fluffy shelf. But pretty entertaining. Jet-powered helicopters plus dinosaurs. And still our hero fights with a stick... 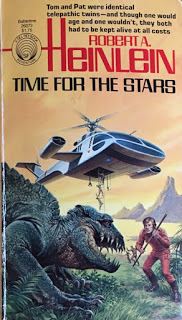 If I decide to reread and post about books I've read before, the top of that list would be Rose Macaulay's The Towers of Trebizond, which is so good. I've been poring over other people's posts of preparation--I just changed 'reading' to 'poring over' to compound that alliteration--and I haven't seen anybody mention Kenneth Stampp's book on slavery, The Peculiar Institution, which I remember as fascinating. The first volume of Anthony Burgess' Malaysia trilogy, Time for a Tiger, is from 1956, and I liked the trilogy, but then I'd probably feel I should reread the whole trilogy, and what I really want to reread of his is Earthly Powers. The first volume of Naguib Mahfouz' wonderful Cairo Trilogy, Palace Walk, is from 1956. Long Day's Journey Into Night. There's two Rex Stouts (Three Witnesses, Might As Well Be Dead) from that year, which could have been in the picture above. Etc., etc. The more I look the more I think I've had very good reading out of 1956.

And I'm looking for that to continue! Thanks to Kaggsy and Simon for hosting!