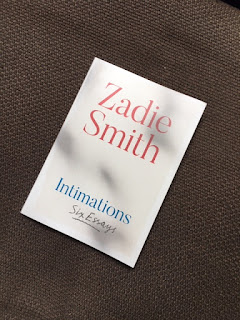 The Other Reader and I sometimes wonder if Zadie Smith is a better essayist or novelist; the real answer is, why choose? Her two previous volumes of essays (Changing My Mind and Feel Free) were both great; there's a great deal of incisive intelligence in them, not necessarily a thing one expects in a novelist. I found the first more of a revelation: I particularly loved her reminiscences of her father in the earlier volume. It may also be that I'd already read a good deal of the second (in the New York Review of Books) by the time I read the collection.

Intimations is a short volume (under a hundred pages) and a product of our current crazy times: she's donating her royalties to charities for racial justice and pandemic relief. It deals with perceptions of race, being in New York in the pandemic, too much quiet (especially when one has children). Something to do, when there's nothing to do.

But the longest and best essay is called Screengrabs, written, it seems and as the subtitle suggests, 'before the virus', and it's largely a series of character sketches: 'a character in a wheelchair', 'a woman with a little dog', 'an elder at the bus stop'. They feel very true.

So maybe she's a novelist after all.

I was in a new bookstore for the first time in a long time (Type Books here in Toronto) and it felt wonderful, even if I had to wear a mask, making my glasses fog up. So nice to once again see what's on the table at a good independent bookstore.

I also picked up the Vivian Gornick book on rereading, but the first book she discusses rereading is D. H. Lawrence's Sons and Lovers.  I thought maybe I ought to read it first, for the first time.