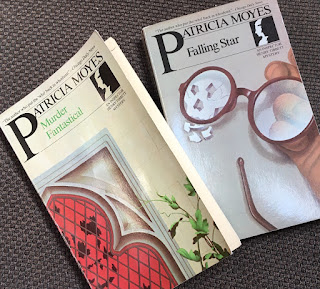 Finishing off my books of summer, though these actually got read a while ago...
Both feature Inspector Henry Tibbett of Scotland Yard, Moyes' regular detective. He's famous because he has a nose for solutions.

The first one I read was the earlier (1964). Bob Meakin is an aging star with some enemies and a tendency to womanize. You know from the moment he appears he's going to be the first victim: he falls in front of a subway train in the course of a movie shoot, possibly accidentally, though of course not.

The fun thing about this one, at least for a while, was the narrator, Anthony Croombe-Peters or 'Pudge.' Moyes' novels are usually told in the third person, but in this one Pudge tells the story. He's the son of a rich lord with some money of his own and he's dragooned into financing a movie by an old school friend with a script. Except Pudge takes his job seriously: he's fastidious about cash flow and is a bit prissy about the bohemian carryings-on around him. He's pretty funny.

"...if there's one thing I hate, it's the sort of book in which characters don't go to the police when they've no earthly reason for not doing so."

(Which is Cadogan in Edmund Crispin's The Moving Toyshop, and of course it's prelude to Cadogan and Fen not going to the police themselves.) It's true here, too, and Pudge doesn't go to the police when he ought to. He was so determined about not going to the police, I began to wonder if we were going to have the Roger Ackroyd solution. Which the novel does flirt with, and after one particularly Bozo-ish move by Pudge I was even rooting for, but no. Anyway, while some of the suspense was generated by Pudge being more stupid than he ought to have been, it was still fun.

Also, while one ought not complain about the reasonableness of murder methods in cozies, the two in this were particularly silly.

Even better, though, was Murder Fantastical (1967). George Manciple, the eldest male of the Manciple family, owns a decaying country estate in the town of Cregwall. Raymond Mason is a London bookmaker, now attempting to climb the social ladder, and he desperately wants to buy Cregwall Grange. He's already engaged in some shenanigans to drive Manciple and his wife out, but then he's shot dead on the Manciples' driveway in a way that looks impossible. A country house murder.

It was the wacky Manciples that made this one for me. There's George and his wife, but various others as well. Each one of them has their own eccentricity--as well as a reason not to lose the house, or to keep George from losing the house. Raymond Mason's son is in the picture, spouting Marxist nonsense, and amusingly at odds with his late capitalist and social-climbing father. Potential murderers abound.

Is there the possibility of a romance? There is.

It all gets resolved at a comical church jumble.

If Falling Star played with being The Murder of Roger Ackroyd, then this one nodded to "The Problem of Thor Bridge," but wasn't quite it either. The solution here was both surprising and amusing.