In the epigraph to his debut novel Appointment in Samarra, John O'Hara quotes Somerset Maugham's version of an old story involving Death. Death runs into a servant in the morning market at Baghdad; the servant recognizes Death, and begs assistance of his master to flee as far he can, and his master gives him money and a horse. When Death is asked that afternoon, Why did you frighten the servant if you didn't mean to take him? Death answers, I didn't intend to frighten him. I was just surprised to see him in Baghdad, since he and I have an appointment in Samarra tonight. (127 km according to Google Maps.)

An appointment in Samarra. So you suspect from the start it's not going to end well for somebody, and it doesn't.

Based on the epigraph, this is not very, but a bit, spoilerish...

That somebody is Julian English.

The story takes place in Gibbsville, Pennsylvania, a stand-in for John O'Hara's hometown of Pottsville. (Anthracite coal country northwest of Philadelphia.) Julian is the son of the local society doctor, and ought to be well enough off, but his car dealership's sales are a little soft. It's Christmas, Hoover's the president, and the Great Depression has started. He's married to Caroline, whom he's known since they were children, and it seems a good marriage; certainly she's in love with him, though she can see his flaws.

What are those flaws? The root of them is the excess consumption of alcohol.

Too much alcohol--or is it something more fundamental?--leads Julian to do three bad things during the course of the novel. He throws a drink in Harry Reilly's face; he has a sexual rendezvous with Helene Holman; he gets into a fistfight with Froggy Ogden. He owes Reilly money and is worried Reilly may sleeping with his wife; Holman, a local torch singer, is the mistress of the town's gangster/bootlegger; Ogden is a vet who lost one arm in the Great War and can hardly fight back. In the end? Julian has that appointment in Samarra.

The novel was famous for its scandalousness when it came out. Husbands and wives have sex, and sometimes enjoy it, even the wives. Well, that may have been news in fiction in 1934, but less so now.

There's a self-destructive streak in Julian that's not explained. Is Julian's alcoholism cause or result of that self-destructive streak? I'm not certain, and not certain that we're meant to know. But while Julian is the main focus, the novel doesn't limit itself to him; it's a short novel (225 pages in my edition) and yet it presents a substantial cross-section of Gibbsville society. Which is both impressive and also good: I found Julian's company a bit of a cross to bear.

So I'm not entirely sure what I thought. Self-destructive alcoholics are hard to take, in fiction as in life. Comparing this to Malcolm Lowry's Under The Volcano, I'd say Geoffrey Firmin is the more convincing drunk. Firmin is further along the road to dissolution than Julian; Firmin's state of confused mind is presented in more convincing detail; everything Julian does seems contingent, it seems like he could as easily have done something else, so why did he have to die? We see occasional hints of engagement with the world in Geoffrey Firmin, of the man he once was, but his thoughts in the present mostly revolve around how to find that next drink. Firmin's story had the inevitability of tragedy; Julian's was more like an accident.

The other curious comparison is to Updike. The edition I got from the library has an introduction by Charles McGrath, who is at pains to tell us that Updike valued O'Hara very highly. In an introduction this is supposed to make you more enthused to read the coming book than you were before, but I'm afraid the fact that Updike (the 'penis with a thesaurus'*) liked it had the opposite effect on me. I still liked the O'Hara, though, despite that... 😉  and not just because the prose was un-Updikean. But it's clear that Updike had read this novel: at one point Julian thinks about escaping his situation, hops in a car and drives off only to return to town. Was that Julian English or Rabbit Angstrom? Rabbit, too, is a unsuccessful salesman, living in a smallish Pennsylvania town, who decides he can't take it any more and drives off only to return. Rabbit drives further than Julian, but otherwise...

The novel is on that hundred-best list of Modern Library 20th century novels, problematic as that list was. I'm glad to have read it, even if I'm not entirely convinced by Julian English at the center of it. DolceBelezza and WutheringExpectations were or are also currently reading it. 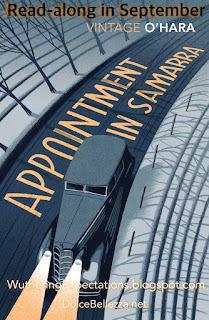 *David Foster Wallace is responsible for labeling Updike the 'penis with a thesaurus.' It comes from his review of one of Updike's lesser novels Towards the End of Time, and he attributes the comment to an unnamed female reader of literary fiction under the age of 40. If she exists, she's become very famous, anonymously. Perhaps it's not entirely deserved, but I know I'm not the only one who can't now think of Updike without thinking of that characterization.