Jules Verne's 20000 Leagues Under The Sea 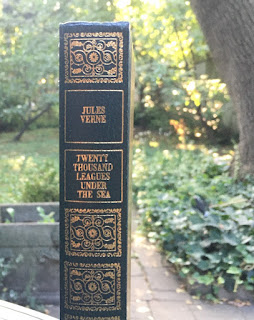 OK. You know the basic story. But a few details first.

In 1866 there are reports of a giant sea monster attacking ships, probably something like a narwhal. An expedition on the ship Abraham Lincoln is outfitted to find it, presumably kill it and mount it on a board for some museum. Pierre Aronnax, a French scientist with a taste for adventure joins the expedition. Aronnax brings along his servant Conseil. The other important person on this expedition is the Canadian harpoonist, Ned Land. (Because what sea-monster hunting expedition doesn't need a savage harpoonist?)

They find what they're looking for, and well, it's not a giant narwhal.

Captain Nemo's ship, Nautilus, is attacked by the Abraham Lincoln, and in fighting off the attack, Aronnax, Conseil, and Ned Land are thrown overboard only to be rescued by the Nautilus. Rescued, but not released, and our trio in the company of Captain Nemo go sailing around the world, having adventures.

The book is an early science-fiction story, and like a lot of later hard science fiction, it spends a good deal of its time speculating on the nature and possibility of future inventions, submarines and diving suits in particular. Here Verne did pretty well, it seems to me. The novel is also interested in actual contemporary science, especially lesser known instances in biology. This is Aronnax' field, and he is forever fascinated by sightings of species he knows about only by repute. He tells us about them:

A flight of sea-swallows rested on the Nautilus. It was a species of the Sterna Nilotica, peculiar to Egypt; its beak is black, head gray and pointed, the eye surrounded by white spots, the back, wings, and tail of a grayish color, the belly and throat white, and claws red.

Most people seem to find this sort of stuff dull, and, well...I'm most people, too. I suspect this went over better in the 19th century when it wouldn't have had to compete with National Geographic specials.

There are two sources of tension, interrelated. Our trio of rescuees are happy to have been rescued, and are mostly enjoying the adventures, but have occasional thoughts about getting back to civilization. Captain Nemo says he never will set them free. We know they must have gotten off the Nautilus eventually, because we're reading the book Aronnax has written. So how did it happen?

The other great question is Captain Nemo himself. Who is he and why does he hate the world so much? Why will he not even have contact with the world to the extent of setting our trio down on a shore someplace out of the way? He doesn't seem to be a monster, just deeply injured. We get various clues, but no complete answer, at least until the sequel The Mysterious Island.  Which I haven't read. I do wonder a bit if any answer can be good enough.

Anyway, pretty fun. It was weirdly a much timelier read for me than I would have guessed. Moby-Dick is alluded to on the third page and it seems to me Verne might actually know the book. I'd sort of long been under the impression nobody had read Moby-Dick until it was rediscovered in the 30s. That doesn't seem to be entirely true. Stevenson knew it and now it seems it Verne did, too.

The other even stranger connection was Pontoppidan. Turns out there's a Bishop Pontoppidan (1698-1764), ancestor of Henrik Pontoppidan, author of Lucky Per, who wrote a treatise on sea monsters, cited by Aronnax early on. It's not every day you see the name Pontoppidan.

My Heron Books edition doesn't say who the translator was, which is bad form, but I believe it to be the Miller revision of the original Mercier translation. The introduction tells me that '20000 Leagues Under The Seas' would be a better translation of the original French; it gives a better impression of what happens, too. They zoom around a lot, rather than going to the absolute bottom of the ocean and staying there.

I've finished all my books of summer, but haven't finished blogging about them. But I took the book back outside for its photo op, and read a good chunk of it while here.